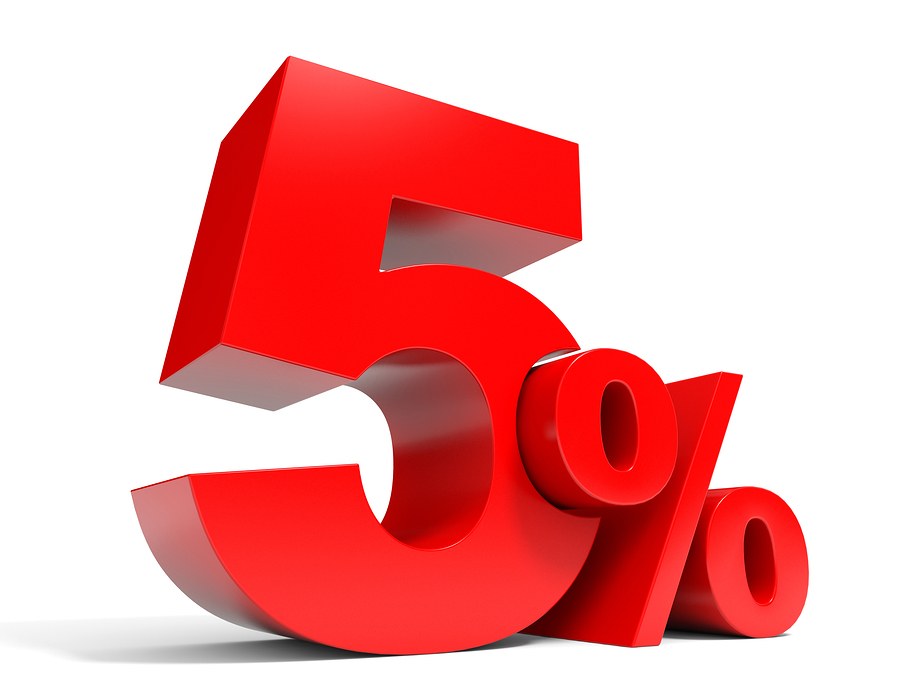 What would happen to your life if you gave everything just 5% more effort?

It’s not always a massive effort, a radical change, or an overhaul. Often it’s just changing at the margin that makes all the difference.

I recently had the opportunity to ask Michael about his research and new book. Michael Alden is the founder and CEO of Blue Vase Marketing and a recipient of SmartCEO Magazine’s 2016 Future 50 Award.

What made you decide to research the concept of 5%?

After the publication of my first book, Ask More, Get More, I received some fantastic feedback and accolades.  But as I continued to speak with people about achieving their goals, I found that many of them wanted more.  Despite all of the time and money they put into “personal development,” they were not where they wanted to be.  I wondered, why are so many people stuck?  Is there something that the average, everyday person can do to get ahead?  And is it something that is truly achievable, something that doesn’t cost money, something that yields real tangible results?

I reflected on what would happen if we applied just 5% More to virtually every aspect of our lives.  Was there research that showed what 5% More can do? I didn’t have the answer, so I began to study what our lives would look like if we had, did, or wanted just 5% More.  The information I found and the science to support what just a little effort can do in virtually every aspect of our lives was compelling.  But when I dug a little deeper for anecdotal evidence into my own life and the lives of other successful people, it was even more astounding and profound.  Instead of trying to make big changes, the way for any person, anywhere in the world, to improve his or her life, health, wealth, or relationships, and achieve their goals is by just adding 5% More effort.

“Get a little success, and then just get a little more.” –Maya Angelou

One More Makes A Leader

Would you share an example of someone who achieved success by applying the 5% More concept?

I sold cars right after I graduated from college.  There was a tall, skinny, somewhat awkward, but enthusiastic salesperson named Brian there whom I will never forget.  He taught me so many things, not only about selling cars but about how to approach life.  He was also on top of the sales leaderboard month after month, and he always gave just a little more effort every day. 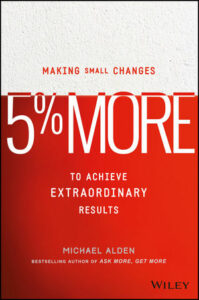 One day, he sold FIVE cars.  Even for some of the largest dealerships in the country, five in one day is a lot of cars.  It was getting late, just before closing on a hot summer night.  Brian had already sold those FIVE cars, and he saw a customer out on the lot.  He jumped from his desk and headed out to greet the customer.  But just before he did, I asked him why.  I said, “Brian, you have already sold five cars.”  He told me something amazing.  He said, “Mike, every day I tell myself I want to just sell one car, then once I sell that car, I tell myself I want to sell just one more, until it is time to go home.”

Every day, Brian took himself just a little bit further and achieved above-average results.  You see, he was working until close anyway, so why not do just a little bit more?  Oh, I bet you are wondering what happened with that customer.  Well, Brian did not sell that customer that night, but the next day when Brian showed up for work, the customer from the previous night did as well.  Brian’s efforts, gave him a sale the next day.

“Success is dependent on effort.” -Sophocles

Change Your Health with 5% More

How can giving 5% more impact your health? 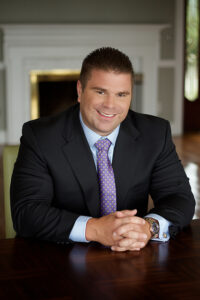 I’m a “big guy.” I played football my whole life, and I’ve told people if I have an addiction, it would be food.  I’ve always gone to the gym most of my life, but fitness results are mostly achieved through diet.  When you look at the diet industry and all of the fads that come out year after year, what happens with most if not all plans is that people can’t maintain them.  I did the research and our brains work best and adapt at optimal levels when gradually modified, when gradually changed until that change becomes habit.  So, as a big guy, I hit an all-time high weight about six months ago, and I was shocked.  I was 272 pounds.  I’ve tried everything you can imagine – from pills, powders and potions – for that quick instant change we all want.  But, it doesn’t exist.  Today, I am 245 pounds, still off from my ideal weight but much healthier.  That is a little over a pound a week that I have lost.  It hasn’t been easy, but it has been gradual and sustainable.  I put a plan in place that works for me, and each week I try to get a little bit better.  Am I perfect?  Absolutely not.  That is the best part about the 5% More mentality, you don’t have to be perfect, you just have to work at it a little bit and be aware of your gradual steps each day.  I joke around and say my next book is going to change the diet world.  It’s a concept that I think most people will recognize.  The title will be Eat Less Exercise More.

“The last 3 or 4 reps is what makes muscle grow. The area of pain divides the champion from someone else.” -Arnold Schwarzenegger

Is it possible to be 5% more persuasive?

Absolutely, but there is a point where it may be too much.  Sometimes people persuade a person or make a sale. Then they feel like they need to keep talking and, as a result, their attempt at being more persuasive blows up.  In the movie Money Ball, there is a great scene with Brad Pitt and Jonah Hill.  Brad is playing legendary GM Bill Bean of the Oakland A’s.  Billy is negotiating a trade with another team, and he gets the response he wants. Then he hangs up the phone.  Peter Brand played by Jonah Hill asks why he hung up so abruptly. Billy Bean told Peter that when you get the answer you want, there is no need to continue the conversation, the result has been achieved.  So you can up your persuasive game. Just be aware of when you get the desired result and then hang up that conversation.

How has the 5% more principle made a difference in your life?

5% More has made my life more quantifiable so I can see the micro successes and even the micro defeats I experience each day.  But, it has also given me achievable realistic goals to set that have allowed me to build a solid foundation for business and life.  I look at virtually every aspect of my life in 5% More moments, and it makes it easier to adapt, grow, and enjoy my life.

“A little more persistence, a little more effort, and what seemed hopeless failure may turn to glorious success.” –Elbert Hubbard

Rinse Cottage Cheese to Get the Winner’s Edge

I have to ask about “rinsing cottage cheese” since you shared the story….tell us about that.

In Good to Great, Jim Collins tells the story about six-time Hawaii Iron Man Champion Dave Scott and his training regimen.  Scott was an elite athlete competing against other elite athletes, and at his level it is the slight edge that separates the Good from the Great.  He believed that rinsing the potential fat off of his cottage cheese before he ate it gave him that edge.  It was such a powerful story, and it resonated with me.  The point is that regardless of what level you are playing at, it is the small modification that separates us.  I reached out to Jim Collins because I wanted to interview him on my podcast.  He was unavailable, but he sent me a handwritten note that said, “keep rinsing your cottage cheese.”  That’s one of my favorite rejection letters.

Who in Your Life Deserves a Gold Medal?

Don’t Miss the Magic Around You