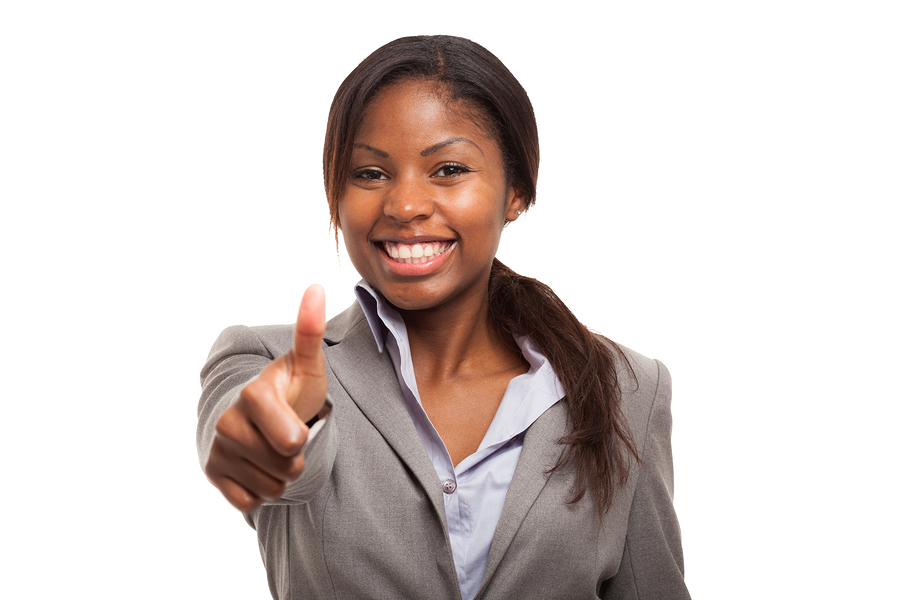 Most people want to be positive, to lead in a positive way, and to think positive thoughts. Not many people aspire to be negative.  We laugh when we see the donkey, Eeyore, in Winnie the Pooh, but most of us can name someone with that mindset.  And all of us go through periods where we may exhibit that behavior.  How to consistently create a positive mindset is a skill.

Recently, I spoke with Dr. Kathy Cramer, who has just released a book called Lead Positive.

“Leading positive is when a leader is looking at what’s possible, what’s positive, what’s valuable, and what they can leverage in the moment.” -Dr. Kathy Cramer

Your new book is titled Lead Positive. What does “leading positive” mean?

It took us a long time to come up with that title, believe it or not. It’s very simple, very straight forward, and people tell me that they get it right away. It’s about leading and it’s about moving forward in a positive way towards a positive result.


Lead Positive also has a subtitle that is very important to the meaning of the book and the purpose of the book: What Highly Effective Leaders See, Say and Do.  In my study and experience with coaching leaders, I have found that the see-say-do framework is a self-reinforcing loop.  Oftentimes, leaders are not really aware of exactly what they’re paying attention to. But whatever it is dictates in a very direct way what will come out of their mouths—what they’re going to say—and then ultimately what they do.  So it’s a virtuous cycle. 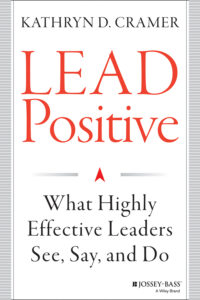 Leading positive is when a leader is looking at what’s possible, what’s positive, what’s valuable, and what they can leverage in the moment.  When leaders are looking at the upside of a situation—welcomed or unwelcomed—then they create a virtuous cycle.  They start talking about it, they say out loud what they’re seeing, and then other people join them in taking action, doing what is necessary to really take advantage of the upside.

In your research on leadership, what distinguishes a highly effective leader?

One of the things that stands out about highly effective leaders is that they actually spend five times more attention and effort leveraging what is possible and what is positive in the moment than they do focusing on problems. That is a big reversal from what most of us by nature and nurture do almost automatically.

What neuroscience refers to as our negativity bias literally equips us to be more sensitive and more reactive to something that spells danger, harm, problem or something’s not right. And so if we let that negativity bias have its way, most of us are literally the opposite; we’re focusing on the upside five times less than the downside.

What we’re doing here with highly effective leaders is we’re training them how to be aware: “What am I paying attention to?” And if it’s a huge problem or a huge barrier, something that’s significant, of course, you need to pay attention to it, but pay attention to it as an asset-based thinker would—by focusing five times more effort on the assets inherent in the situation, even if the situation is problematic.

On the other hand, deficit-based thinkers are people who have not tackled or tried to tame their negativity bias. It’s quite easy to do. It’s a simple process, but we find it difficult because it means cultivating a new habit.

Soul is all about meaning what you say and saying something meaningful.” –Kathy Cramer

I’m thinking of Franklin Delano Roosevelt here.  In his famous inaugural speech, one of his first lines was, “The only thing we have to fear is fear itself.”  Let’s just take that one memorable line. There is tremendous substance here, which really refers to the psychological fact that when you are afraid, when you’re in deficit-based thinking land, there’s some anxiety. And in this case, America was going through the Great Depression, so the anxiety was profound. When we feel hopeless we have a very narrow focus. Our minds operate like lasers zeroing in on what the problem is and how to escape. But there is no creative bandwidth at all in that.

The sizzle that’s associated with this phrase has to do with the emotion, the profound warning that you can hear in FDR’s voice. We can go to YouTube, we can Google this particular speech, and we can hear it thanks to technology now and even view him as he spoke those words. The tone of his voice and the message itself had sizzle because they were speaking directly about emotion.

The soulful nature of this part of his communication can be seen in how dedicated and committed FDR was in terms of making sure that people understood the gravity but also his commitment to move forward in a more positive, proactive, creative way. Oftentimes soul is not explicitly said, but again, the way the voice and the way the body is getting behind the message helps the listener know that it is meaningful.

I’ve said in the book that soul is all about meaning what you say and saying something meaningful, and certainly that line carried the day in terms of its meaning and its value to the audience.

Start being before you start doing.” –Kathy Cramer

Powerful advice from Dr. Cramer: “Start being before you start doing.” Why is introspection and reflection vital to becoming a good leader?

When you can pause in the heat of the moment, you turn down the fire that is causing you to want to react immediately. We walk through many of our days with a tremendous sense of urgency, getting tasks done, checking them off.  If you pause to reflect on how you want to be, you can actually call forth that quality.  Taking that reflective pause allows you to bring your best self into that moment, whatever it calls for.

“Decide how you want to be rather than be captured by the moment.” –Kathy Cramer 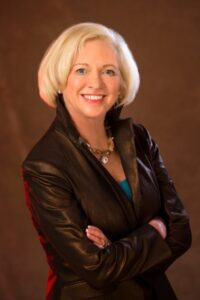 My first tool for how people can pause in the moment to think about how they want to show up is called…breathing. We all take deep breaths when we pause and reflect on something; it’s a natural pairing. And that’s very different than the more shallow, more rapid breathing that happens when you are in a state of anxiety and urgency, when you want to get something fixed.

The most important thing is that you need to pair the breathing with what you’re saying to yourself about how you want to show up.  It’s not enough just to breathe, it really is important to ask yourself the question, “How do I want to be in this moment?”

It is literally a decision; that’s the most important thing. Decide how you want to be rather than be captured by the moment, especially if you’re dealing with a problem.

The pause that refreshes

The other way that reflection works for highly effective leaders is when something positive and really meaningful happens. This is what I call the pause that refreshes and reinforces. There is a technique in the book that we refer to frequently called “Scan, Snap, Savor.” This three-part 60-second technique is something that you do mentally.

You might be driving, you might be walking from one meeting to another, and in your mind’s eye, you scan for a sign of progress. This happened to me this morning. I’ve been working on getting a very big contract for over two years, which is a long time. Normally, we would have this contract and this engagement much sooner, so you better believe that my patience has been tried.

I was speaking to the woman who has the decision-making capability of hiring our firm, and she asked me to come see her next Tuesday. This was a small step in the right direction and right after our conversation, I went over that moment. I scanned for the moment when I heard her say, “Let’s meet in person next Tuesday.” I took in the sound of her voice, how calm and clear she sounded. I heard that voice of hers again as I snapped the sensory details of the moment to make a mental picture of the moment in my mind. And then I savored the moment that we had when we found that 1:30 was a time that worked for both of us. I really relished that moment when I put the appointment in my calendar. Now that took me 60 seconds upon reflection to scan, snap, savor.

What this does in real time is it makes the future that you’re pursuing much more likely to come true. The way I show up in that meeting will be very much in favor of getting the contract. I will show up with the optimism and the confidence that that brief moment of progress provided because I’ve done the work of embedding it in my memory. And that is going to make all the difference in terms of what I see, what I say, and what I do in that Tuesday meeting.

How does a leader help create a positive organizational culture?

If I had to single out one thing it would be to create five-to-one feedback as a habit and a practice for all leaders and all team players—making sure that in this culture that we are creating together that people hear five times more often what they’re doing right, what they’ve done well, and what their effort has yielded when they do corrective work.

When we work in organizations we find that most cultures are not feedback-rich at all. It’s not as though they’re one to five positive to negative, it’s literally that there’s a paucity, almost an absence of feedback. Regular feedback optimizes everyone’s performance. Just imagine if you were finding out on a daily basis what it is that you were doing that truly mattered, that truly moved the needle. What we measure and what we give feedback about is literally a signpost for what matters most to moving things forward. Learning organizations only exist where feedback does.

We are very sensitive and we are protective; we protect ourselves against hearing the negative, so much so that sometimes we don’t even remember what somebody said when they were criticizing or correcting us. It’s so unpleasant. But if you’re used to receiving five times more positive feedback than negative, you’ve really earned and developed a trusting relationship. You’re not on guard when the corrective feedback comes your way. You’re much more able to take it in and to make the improvement.