The idea for the novel is not only clear, but the story is outlined and researched.  Still, the page is blank.  She is waiting for the inspiration to make it happen.

The business to create a fortune is constantly pushed to the backburner.  Magazines and books are consumed like candy as he studies ideas only to continue looking.  The idea never is good enough.

Someone is waiting for a divine moment, that flash of insight that is a near-religious experience.  Until that happens, the idea is frozen.

Creativity myths have been around for centuries.  David, you say that these myths hinder the creative process.  In fact, the subtitle of your new book is The Truth About How Innovative Companies and People Generate Great ideas.  How does knowing the truth about these myths help?  Why is rewriting the myths so important?

David Burkus is the author of The Myths of Creativity: The Truth About How Innovative Companies and People Generate Great Ideas. He is also founder of LDRLB and assistant professor of management at Oral Roberts University. Find out more about David at www.davidburkus.com. He also writes for Forbes, 99U, and the Harvard Business Review.

We’ve been writing myths for thousands of years. Myths are attempts to describe the world around us, everything from where sun comes from to the creative process. But myths are dangerous because they’re often not true, or at least are half-true. So it is with the myths surrounding creativity. They help us explain a little bit, but because they aren’t totally true, believing the myths in entirety can actually limit our ability to express our creativity. If we question them, find the truth, and rewrite them, then we stand a better chance of reaching our full potential. 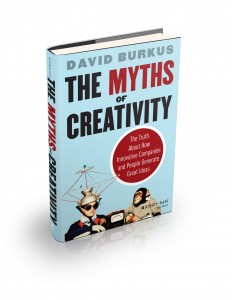 You are rewriting and busting these myths, but they are legendary in some ways because we love them.  That “falling apple” moment or “lightning strike.”  Why do we love these stories?

I think we tell a lot of these stories because they let us off the hook. If some outside force, a fallen apple or a lightning strike, is responsible for our creative insight, then the pressure is taken off us to generate great ideas. But creativity doesn’t come from outside ourselves, it comes from inside and from thought patterns we’re all capable of, as long as we believe we are capable of them.

Your new book The Myths of Creativity outlines ten creative myths.  Let’s walk through a few of these myths. Starting with the Expert Myth, aren’t trained experts the best source for creative solutions to dire problems?

Not always. In fact the research shows that many times professionals in a given field reach a peak early or mid-way through their career and then their contribution to the domain lessens. In Physics for example, it’s commonly held that PhDs will make their greatest discoveries before the age of 30. (Einstein was 26 when he published the paper that won him a Nobel Prize.) The reason is that expertise is important, but truly creative ideas often come from people on the fringes of a domain. They have enough experience to understand problems, but don’t have enough experience to write off “crazy” ideas without testing them. They don’t know what won’t work; so they try everything. The lesson is to keep learning and gaining experience in a variety of domains because you never know what field your breakthrough insight will come from.

Let’s talk about The Constraints Myth.  You write “constraints shape our creative pursuits.”  Give an example of how constraints encourage creativity.

We tend to assume that when we’re having trouble coming up with a viable solution to a creative problem, it’s because we’re too constrained. In reality, constraints actually help us find solutions. It’s impossible to solve a problem without understanding the structure around it. We can generate lots of wild ideas, but without the constraints of a problem, we’ll never know if those ideas are also useful. That’s why a lot of companies actually force constraints. Companies like 37Signals mandate small project teams and put limits on the amount of features their products can have. And it’s paying off for them. Creativity doesn’t just love constraints, it thrives under them. It’s like G.K. Chesterton suggested,  “Art consists of limitation. The most beautiful part of every picture is the frame.”

Art consists of limitation. The most beautiful part of every picture is the frame. -GK Chesterton

Your book includes numerous ways for leaders to help their organizations encourage creativity.  Working with leaders, are there a few common problems that you almost always see?

I end the book with a discussion of The Mousetrap Myth, which might be the most dangerous myth of all. We’re often told things like, “If you build a better mousetrap, the world will beat a path to your door.” But the truth is great ideas get rejected all the time. Kodak invented the digital camera but rejected it. Xerox invented the personal computer but handed it off. If you build a better mousetrap, most often the world beats it down…or worse, ignores it. There’s even research supporting the idea that humans are terrible at judging creative ideas. Creative ideas, by definition, are novel and useful, but it’s hard to see the usefulness in new ideas when you’re judging them with an old mindset. As leaders, it’s especially important to remember our inherent bias against creativity and make sure that when we judge creative ideas, we aren’t using their novelty as an excuse to dismiss their usefulness. 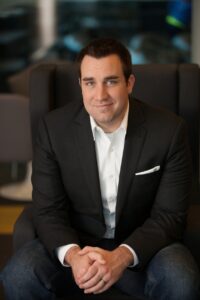 Is it possible to increase your own creative genius?

Absolutely. Creativity isn’t a genetic trait, and it’s not the result of a mysterious force. It’s a skill that can be developed and improved with the right practice and techniques. The idea generation techniques and creative problem solving methods are out there, but it takes a realization that you have the potential for creativity to gain the motivation to try. Once you do, you can work up to something amazing. But the myths around creativity have to be questioned and overcome in order to becoming a creative genius.

The Power of a Mentor