The Hardest Part is Getting Started 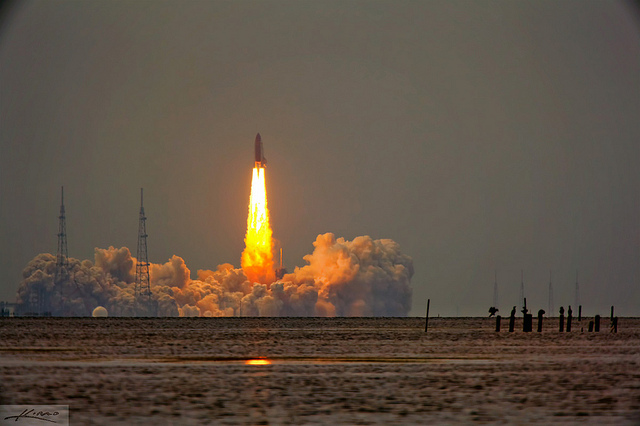 This is a guest post by Jeremy Statton. He is an orthopedic surgeon and a writer. He blogs about Living Better Stories. You can follow him on Twitter or download a free copy of his eBook Grace Is.

One of my regrets in life is never having watched a space shuttle launch in person.

I try to imagine how it might sound or what it probably feels like. But nothing could compare to witnessing the feat of getting something that big and heavy off the ground, through the atmosphere, and into orbit.

The purpose of a launch is to transfer the shuttle and the astronauts and the items stored on the shuttle into space. They go on a mission designed to accomplish a task. The launch is relatively insignificant when considering the greater purpose.

But have you ever thought about what it takes to get the shuttle off the ground? Have you ever considered what must happen first in order for the greater purpose to be accomplished?

Empty, the shuttle weighs 172,000 pounds. But add in the fuel necessary for liftoff and the weight goes up to 4,400,000 pounds. By weight, 96% of the shuttle exists to get it moving.  After the launch, the first big moment comes when the two white rocket boosters on the side are released. This happens at exactly 124 seconds.

The boosters contain 83% of the fuel needed for the entire mission. The mission might last ten days, but a majority of the fuel is consumed in the first two minutes. We associate a space shuttle mission with a bigger purpose than getting off the ground, but the launch can contain the most difficult obstacles to overcome.

The same can happen for whatever purpose you choose to pursue. The start might be the most difficult part of any project.

How many good ideas have you had that never saw the light of day mainly because you never began?

Here are five basic lessons you can learn from a space shuttle launch to help you get started.

Every launch has a countdown. It creates a sense of urgency which helps us plan for what must happen between now and the launch. Without deadlines we tend to stall and wait. The deadline doesn’t mean you can’t cancel or change your plans. Even shuttle launches get scratched. But pick a launch date and then start.

Engineers are always trying to make the shuttle as light as possible. The heavier the spacecraft, the more fuel that is needed to get it off the ground. Make the launch easier on yourself. Don’t try to accomplish too much from the beginning. Cut out everything that is unnecessary. Start small and build over time.

It seems routine to us, but a shuttle launch never is. Not everything can be predicted. Not every scenario can be planned for. Be flexible and make adjustments as you go.

It has been done so many times now, a launch today doesn’t require as much intensity as it might have the first few times. The more you make starting a habit, the easier it will be for you next time.

5. Stop worrying about the outcome.

Igniting that much fuel is always risky, yet NASA does it on a regular basis. They do everything they can to eliminate mistakes, but they never eliminate the risk of failure. Some of us never pull the trigger because we are too afraid of what could happen. If NASA can do it, with so much at stake, you can do it with your project. For most of us, failure can even be an opportunity to learn.

It is important to dream big and develop a vision that shoots for the moon. But to get there one day, you will first have to get started.

Why Selling to the Top Can Leave You At The Bottom