Take Off Your Mask and Speak from Your Heart 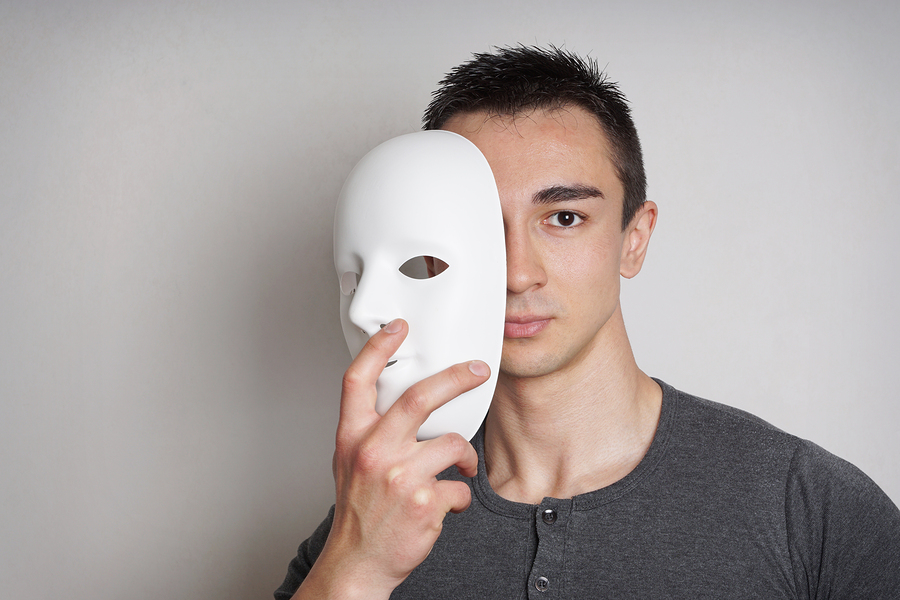 This is a guest post by Dr. Quentin Schultze, Professor of Communication Emeritus at Calvin College, a media company CEO, speaker, and author of many communication books, including the newly released Communicate Like a True Leader: 30 Days of Life-Changing Wisdom. Visit his blog.

Speak from Your Heart

A fine friend and skilled speaker landed in a dreadful situation. He had agreed to address a convention of toastmasters—persons who lead local public-speaking clubs where members overcome common speaking fears and practice effective speaking techniques.

When he arrived a few minutes early for the event, he met with his friend who had arranged the speech. He discovered that the audience was not toastmasters, but postmasters who run local post offices.

He frantically tried to organize a speech in his head while his friend introduced him. Then he took the stage, mic in hand, alone with the whole banquet hall of postmasters peering directly at him. What could he possibly do?

He relinquished his facade.

“I never saw a well-fitting mask. It is a great relief to take them off.” —Robert Greenleaf

My friend explained to his audience that he had planned a speech for the wrong group. That he didn’t even know what postmasters actually do. That he was thoroughly unprepared.

Then he spoke from the heart about what he knew intimately. He told stories about his loneliness. About his fears. About the stifling lack of meaning in his own work sometimes.

My friend’s message was simple but profound: We are all first and foremost human beings, not workers. We share a common humanity. We experience fear as well as hope. We all feel this in our hearts.

Then he thanked the postmasters for the opportunity to share his off-the-cuff thoughts and feelings.

He received a long, standing ovation. The wounded storyteller had connected with the wounded postmasters. By taking off his “professional” mask, he had honestly led them into a shared, human journey of hope. In spite of being unprepared, he had served them as a great leader-communicator.

“Honesty is the first chapter in the book of wisdom.” Thomas Jefferson

If You Fake It, You’ll Eventually Fall

When we put on masks we become fake leaders. And others will sense our fakeness. Sooner or later they will not be inclined to believe and follow us.

The news is filled with stories of political, business, and religious leaders who lived double lives until someone went public with the truth about them. Colleagues covered for them until even they couldn’t stand their leaders’ duplicity. What goes around eventually comes around.

Fake leaders can do well for a time. They can seem smart. Even effective. But eventually their masks fall off. Others see what’s really in their hearts. It’s not pretty.

“If you fake it, you will eventually fall.” -Quentin Schultze

We like to think that leadership is all about using our minds to solve problems and persuade people to follow us. We think of leadership merely as an intellectual enterprise, a brain puzzle. The more spreadsheets the better. The more education the better. Pile on the information! Crank up the arguments!

Having taught college for 40 years I can tell you that our minds can deceive us. Some of the most highly educated people I know simply lack heart. They turn every leadership situation into an argument to be won, not a relationship to be nurtured. They “think” they know a lot—and in some ways they do. But their hearts are not into their work, let alone in their everyday leadership.

Our minds play tricks on us. They convince us that we know what we’re talking about even when we’re clueless. Yet down deep, in our hearts, we know that we don’t know as much as we pretend to know about ourselves, others, and our work.

For decades I taught a senior seminar that included highly successful people as classroom guests. I asked every one of them a few key questions. The most revealing question was this: “Do you think your success was more a matter of your abilities or opportunities?”

Every one of these successful leaders said that opportunity was more important. They reported that they worked hard, but they admitted that without the right opportunities their skill would not have made them successful. Many of them said that their success was more about grace than expertise. They spoke to my students honestly from theirs hearts—not proudly from their minds. Clearly their candor in their careers helped make them great leaders, worthy of followers. In fact, my students said that they were more likely to work hard for such facade-free leaders who spoke from the heart.

But opening up is not easy. We are fearful of what others will think about us. It’s easier to posture and pretend than speak openly from the heart.

Of course, we can be too candid. Like some airline passengers, leaders can spend far too much time talking about themselves. Learning appropriate self-disclosure is essential. We need to reveal enough personally to connect with others in our shared humanity, but not so much that our conversations and presentations become self-performed soap operas.

For most of us, however, the problem is excessive fear of rejection. Once we begin taking off our masks, we expose our inner selves to others’ inspection. The risks scare us. What will others think about our uncertainties and self-doubts? Will anyone want to work with or for us?

Leadership Tip: Reveal enough to connect with others, but not too much.

My speaker friend who prepared for the wrong audience was also a pastor. In fact, what made him a fine preacher-leader was his willingness to be honest with his congregation. He courageously risked losing face every time he stood before his congregation. For him, that included telling his congregation that he had doubts about his faith—and his faithfulness! He didn’t pretend to be holier than he was.

You can imagine how my friend’s risky preaching endeared him to his congregation. They followed him because they knew he was on the same kind of doubt-whispering journey that they experienced in their lives.

As a great leader, he walked along with his congregation. He didn’t pretend to fly above them like an angel. By risking face, he was genuinely humble—down to earth, the humus.

We all live with doubts about our leadership abilities. Are we really cut out for leadership? Will we have opportunities to prove ourselves? Will we fail?

True leaders admit such doubts to themselves and others. They don’t pretend to know everything about leading. They communicate the most powerful message of all: “We’re in this together. So let’s move forward together even though we don’t feel like we’re completely up to the task, and we don’t know exactly where we’re going.”

In short, the true leader knows he or she does not have all of the answers and is willing to admit it.

“True leaders admit doubts to themselves and others.” -Quentin Schultze

Admitting that our masks make us frauds is essential for all leaders who seek to communicate with heart. Only through such authentic communication can we begin to construct genuine selves that are worthy of what others might think about us in our best moments. The result is not another facade. It’s a genuine person, a real leader who can laugh at being miss-prepared for a speech and yet connect with the audience as fellow humans. 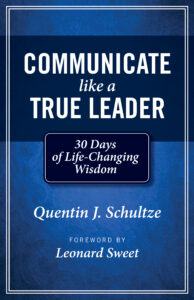 Once I was in the audience when my friend who had spoken to the postmasters was speaking to another group. After his presentation, he came up to me unexpectedly with a signed copy of his latest book. I was deeply honored. I quickly looked at the signature page of the book while he was smiling at me, to see what he had written for me, and noticed that he had misspelled my name. What should I do?

I couldn’t ask him for a new copy, properly endorsed.

I could affirm our shared humanity. “Bill,” I said, “thanks so much. The fact that you misspelled my name is about the highest honor I could receive from you. Neither of us needs to save face. Because of your open heart. I love you.” We laughed. And hugged. And laughed some more.

Why are you fearful of being open with others? What are you covering up? Are you willing to admit your doubts about being a true leader—all for the sake of actually becoming one?

For more information, see Communicate Like a True Leader: 30 Days of Life-Changing Wisdom.

How to Become a High-Stakes Leader

How to Experience the Spirit of Thanksgiving 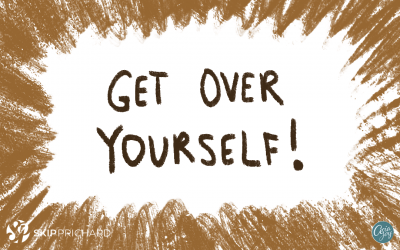 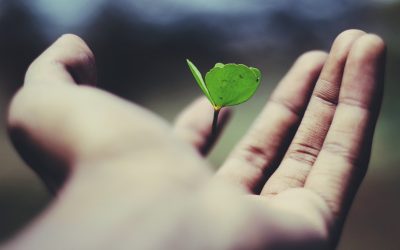 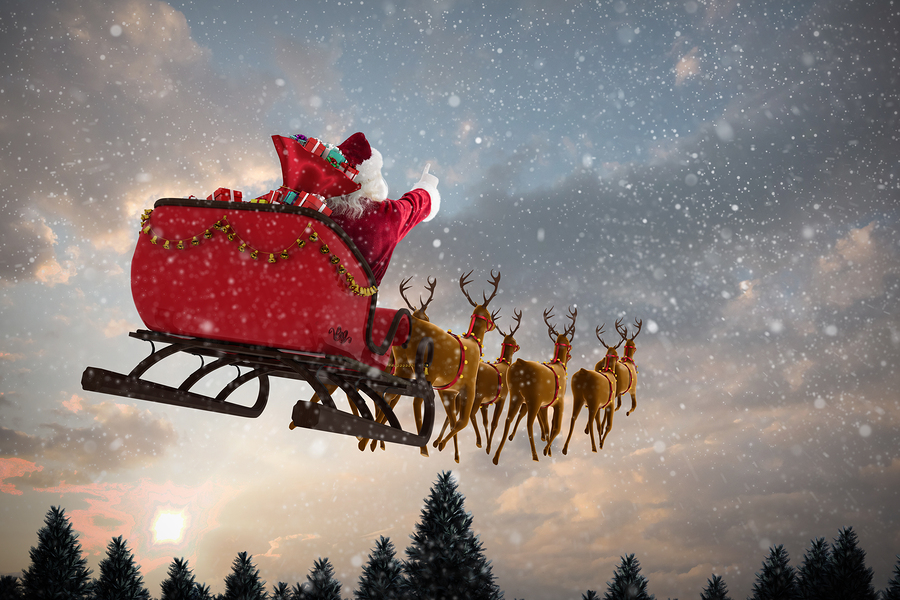