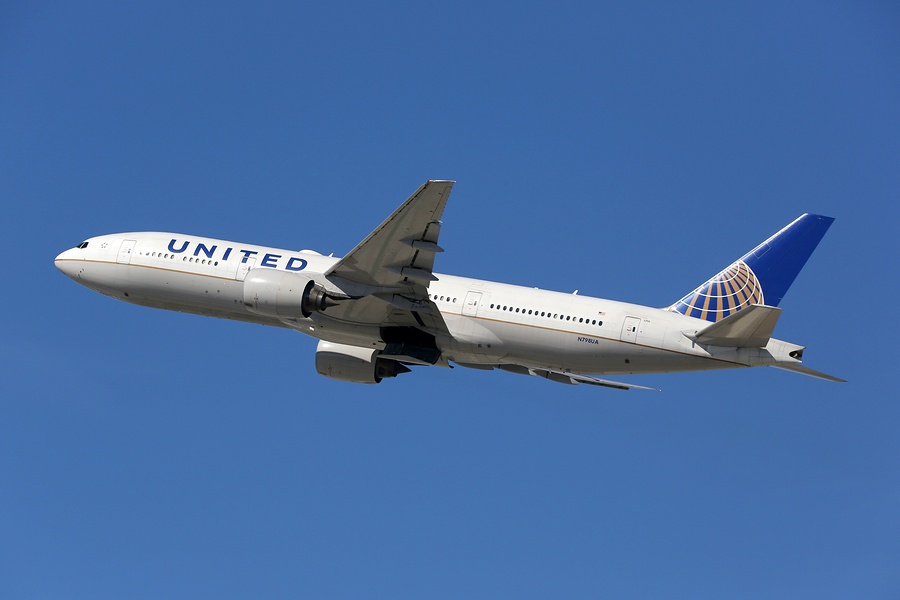 The minute the video starts, it’s obvious it will be explosive. And it sure has been. It has now been viewed millions of times around the world: A man is forcibly removed from a United Airlines flight.

Most of us are offended that the man was treated like this, bloodied as he was hauled out of his seat and dragged down the aisle. Most of us have also had our share of experiences with airlines, and this hits a nerve, like a final straw breaking the collective back of the paying passengers. We’ve been hit with baggage fees. We’ve been told, “No, you can’t have the whole can of soda.” Blankets disappeared ages ago. We’re scanned, wanded, searched, and pushed along through a system full of weary travelers with suspicious glances. Our flights are canceled or delayed for hours—always, it seems, the minute we arrive at the gate, harried and exhausted from running, of course.

Watching this man pulled off so brutally, we ask, “Why was he pulled off the flight?” The answer doesn’t make us feel any better: so that United Airlines could use the seat for a flight attendant.

A customer, obeying all rules, who the airline boarded moments before, who was sitting in the seat he paid for, was chosen at random for removal.

He didn’t want to get off the plane, and so the scene escalated.

Defenders of the airline will point out that this is not only legal, but then they point to his behavior during and after the incident. They will also point out that it was security, and not airline personnel, who removed him.

My law degree is decades old, and I’ve been an inactive member for too many years to weigh in on the legal issue here except to say that it’s far from clear.

What’s clear to me is this:

United apparently chose policy over principle, chose employees over customers, chose to save a few dollars only to lose millions.

“When in doubt, choose principle over policy.” -Skip Prichard

Worse yet is when you remember United’s motto: Fly the friendly skies. Maybe the friendliness only starts when you’re airborne?

Many PR disasters seem to worsen just when you think the lowest point is reached.

And that’s what happened when the CEO stepped in with his comments. He sent a memo blaming the passenger and defending employees, saying that they were following existing procedures. He called the passenger disruptive and belligerent.

Did he apologize? He “apologized for having to re-accommodate these customers.”

Re-accommodate? The man was bloody and seemed to be unconscious!

Only after outrage about his comments exploded online did he change to become “outraged” himself about the incident. His tone has now changed to apologetic. Yesterday he softened them further and even said it was a failure of policy and training. At least the tone is improving.

The minute I saw this video, I said the obvious: This is going to be a PR disaster for United. They better have a full crisis team working on it. When I saw the CEO’s comments, I said to a group that this would now make PR history. It has found a place in marketing classes where these types of mistakes are prominently featured. It may well be mentioned along with other great PR blunders like BP’s spill disaster in the Gulf of Mexico.

“It takes 20 years to build a reputation and 10 minutes to ruin it.” -Warren Buffet

What can we learn from this entire mess?

I’m reminded to always look on the positive side of things. That sentiment was shared by Andy Imbimbo, who posted this:

So many people are posting about this guy being dragged off a plane. I can’t remember the last time everyone has been so…….United!

“So many people are posting…I can’t remember the last time everyone’s been so..United!” -@AndyCoolBeans

That’s a great point. We are mostly united against this behavior. In a politically divided nation, it has shifted the conversation from politics.

Meanwhile, the public relations problem for United reminds me of how each of us can handle our screw-ups, mistakes, and errors in judgment. I’ve made my fair share, too, though thankfully not at all like this one.

Here are a few leadership lessons from United’s….well, to be kind, should I say “lapse in judgment”?

If you can avoid a problem, that’s always the first step. It wasn’t necessary. The employees could have driven the few hours to reach their destination and prioritized the customers. United could have offered a higher amount of money until they had enough volunteers. Why allow all of the passengers to board and take their seats if you didn’t have enough seats for them? There are a number of ways this could have been avoided.

Here’s my rule: Never respond analytically to a problem growing emotionally. Pointing to policies and legalese will satisfy only a small percentage of the public. Most people want you to connect emotionally and sincerely first. No excuses. The language initially used made it worse. “We apologize that we had to re-accommodate some passengers” was such an emotional miss that it fueled the fire of an already outraged public. Always great to think of Molly Ivins. She once said, “The first rule of holes: When you’re in one, stop digging.”

“The first rule of holes: When you’re in one, stop digging.” -Molly Ivins

Apologies are not as easy as they may seem at first. I learned this especially from the research of Jennifer Thomas and the book she co-wrote with Gary Chapman. There is a specific language of apology. This book is a must-read for anyone who wants to improve their communication, but PR departments should take note.

“Genuine apology opens the door to the possibility of forgiveness and reconciliation.” -Jennifer Thomas

Assess the damage and danger. The situation kept spiraling out of control for days, a fire that kept growing. The airline appeared tone deaf, uncaring. Step back and review everything; do it quickly.

Acknowledge what went wrong. This is beyond an apology because it really gets into the specifics. Own up to it. Ever steal a cookie from the jar as a kid? It’s far better to admit it than to look up at your mom with chocolate on your mouth and say, “We have cookies?” Most people are willing to forgive those of us who apologize, especially if we acknowledge all of it up front. Note that this is where lawyers and executives may be at odds. Believe me, I can articulate both sides of the argument.

Instead of blaming, why not show some genuine concern for the man affected? Why not have employees of the airline flood him with well wishes? (Yes, I am guessing the lawyers may want to review each card…) Why not explain your policies and refine them so that this never happens again? Why not train your employees on options? Why not explain the ‘why’ behind it all?

Instead of avoid, admit, apologize, assess, acknowledge, act, what did we see from United?

What United Did Instead:

They allowed the story to run away from them. They lost control of the communication.

“The art of communication is the language of leadership.” -James Humes

They aggravated a bad situation and made it worse with their initial statements. 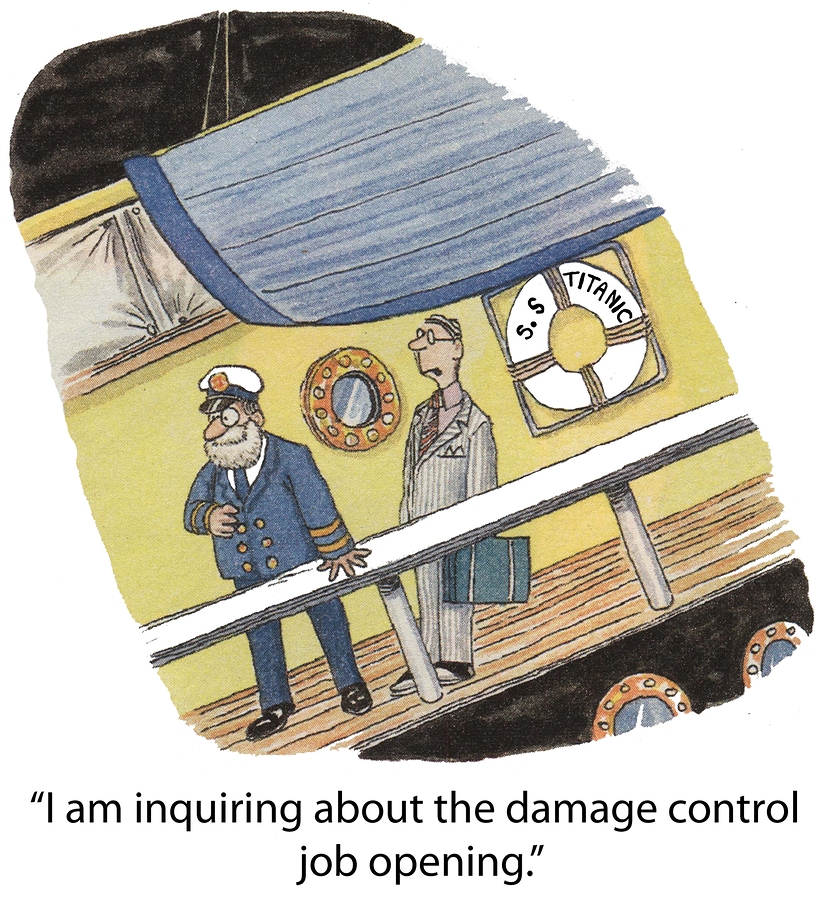 They antagonized the public by blaming the customer.

Their response agitated us all because it recalled the emotional helplessness we’ve all felt in these situations.

They accelerated the downward spiral through a series of gaffes.

Somehow the airline missed how the public would react. They answered emotion and outrage with policy and procedure.

Finally, I want to say that, despite the current issues, I know from personal experience that this is an airline with many caring employees who work hard and try to serve customers. This awful incident isn’t the norm, and it doesn’t define the many good people who work at the airline.

“Be more concerned with your character than with your reputation.” -John Wooden