Commitment: What will you do no matter what? 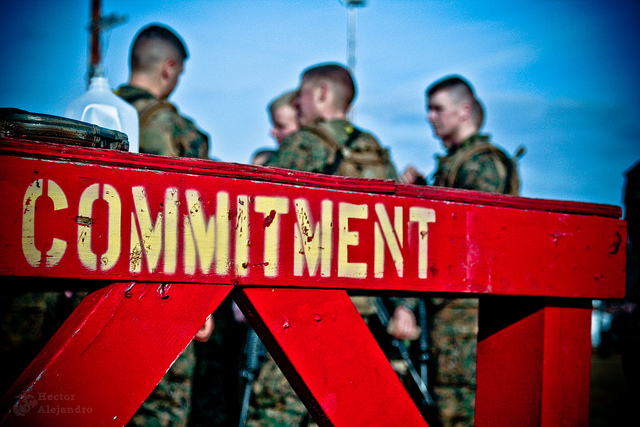 When you make a commitment, especially one to yourself, you begin to energize your mind in a way that opens new doors of possibility.

A commitment starts the engine of the subconscious mind.  It takes a dream or an idea, and begins the process of turning it into reality.  Mixed with discipline, commitment shapes the future.

Steve Jobs is known for a lot of his attributes, but one of them was his commitment.  He was committed to excellence.  There’s one story about him opening up an Apple computer, looking inside and making the team start over.  You can hear the conversation:

Engineer:  Who cares what the PC board looks like?  The only thing that’s important is how well that it works.  Nobody is going to see the PC board.

Steve:  I’m gonna see it!  I want it to be as beautiful as possible, even if it’s inside the box.  A great carpenter isn’t going to use lousy wood for the back of the cabinet, even though nobody’s going to see it.

No cutting corners, no excuses, no games.

Arguably much more important than the design of the computer is the principle Steve was sharing.  He was building a culture.  He was demonstrating leadership.

Commitment like that infects an organization.  My friend John Baldoni, a global leadership expert, told me about his experience with Apple.  He was shopping and asked one of the Apple employees when they would make an iPhone with a keyboard.  The young man said, “We are committed to the on-screen keyboard.”  John was struck by that comment because most clerks would have muttered something else.  Maybe, “Oh yeah, that’s corporate.  So many people want that.”  Instead, the answer was a confident reflection on the company’s purpose.

Commitment at the top translated all the way through the organization is an incredible feat.  Sadly, it’s probably more the exception than the rule.

It isn’t just the CEO, though, who can make a difference with commitment.  Unwavering commitment at any level in an organization will make that person stand out.  You fast become known as someone who gets things done.  You’ll likely find that you’re the one called in to fix a problem.  And then you develop a reputation as someone who is trusted to get the hard stuff done.  That leads to more opportunity.

The problem most people face is that we just don’t get all that excited about much.  To state the obvious:  If your focus is on getting through the day, thinking about what’s for dinner, and then plopping down on the sofa to watch TV, you aren’t going to achieve your potential.

There’s no energy in that.  You soon see your energy levels dropping until you find you’re just existing.  Weeks blend together.  When you look back on a month, you don’t really have anything to show for it.

Whatever pattern you’re in, break it and try something new.  Reassess your goals.  Think about your purpose.  Think about what you can commit to, no matter what.

Passionate and relentless pursuit of your commitments gives you amazing power.

The Power of Convergence