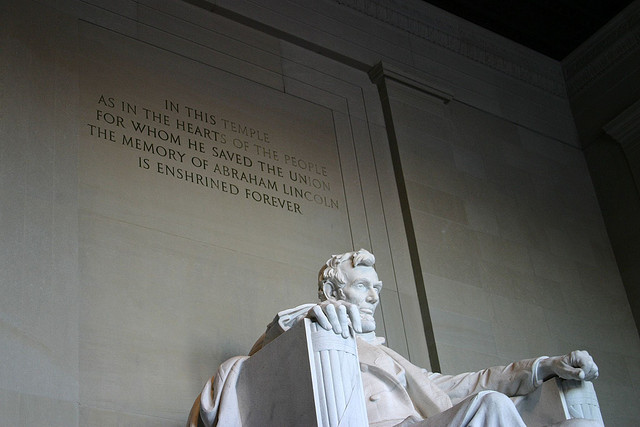 When it was in the theatres, I watched the extraordinary movie Lincoln.  Rarely do I watch a movie a second time, but I’m such an admirer of President Lincoln that I couldn’t wait for its video release.  My family watched it last weekend.  To me, the acting is so perfect that I feel like I am truly watching Lincoln himself.

There are thousands of articles and books about Lincoln.  As I watched the movie, I noted some of his attributes for achieving his goals.  The movie was primarily focused on Lincoln’s goal to pass the Thirteenth Amendment.  Throughout the fight in the House of Representatives, Lincoln was:

1.  Committed.  He was willing to risk his reputation to do what was right.

2.  Clever.  How he won votes in the House of Representatives is part of the story that intrigues me.

3.  Calm.  In the midst of incomprehensible stress, Abraham Lincoln was calm.  He would tell a story, a joke, or quietly sit by himself.

4.  Compromising.  He didn’t compromise his values, but he understood the political necessities and how to negotiate in order to achieve the best possible outcome.

5.  Collegial.  He was polite, courteous and respectful.  We may think of his depression, but he was also witty.  Jokes and funny stories were part of his style.

6.  Cunning.  I love the line in the movie when messengers run to the White House with a question about a Southern delegation.  The question was whether the South had sent delegates to Washington DC to negotiate an end to the war.  If the war could be ended without the passage of the amendment, the votes would evaporate.  Lincoln was cunning in his answer, denying the delegates were there.  The reason?  A technical one: they were in Virginia, not Washington.

7.  Controlling.  Lincoln understood when to be persuasive and when to exert control.  Against the advice of his team, he was determined to push for a vote on the amendment.  Others wanted to wait, but Lincoln insisted and controlled the timing.

8.  Clarifying.  As always with a crisis, there were numerous issues at hand.  Lincoln provided clarity for his team.  The focus was on winning the war and passing the Thirteenth Amendment.

9.  Contrary.  Part of his leadership was acting contrary to popular opinion or advice. Whether it was issuing the Emancipation Proclamation or pushing for passage of the Thirteenth Amendment, Lincoln often acted contrary to expectations in order to accomplish his goals.

Be sure you put your feet in the right place, then stand firm. –Abraham Lincoln

Am I not destroying my enemies when I make friends with them? –Abraham Lincoln

Always bear in mind that your own resolution to succeed is more important than any other. –Lincoln

In the end, it’s not the years in your life that count. It’s the life in your years. A Lincoln

The Surprising Predictive Power of Analytics