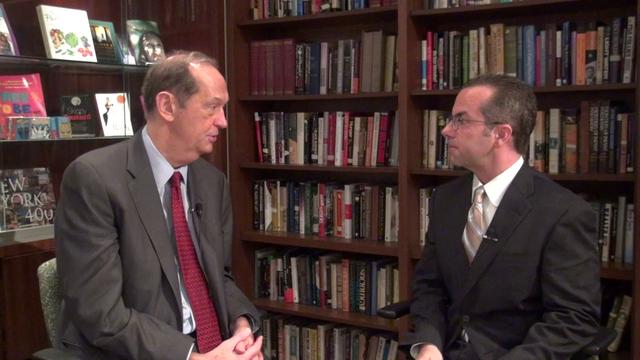 He has a record of achievement few can match:

I’m talking, of course, about Senator Bill Bradley.  Senator Bradley recently sat down with me to talk about a range of topics from his life growing up, his experiences as a pro basketball player, his life as a Senator, and the current issues facing our country. 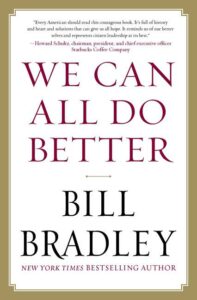 Senator Bradley’s latest book is titled We Can All Do Better.

Five words came to mind as I read the book, and we talked about them in the interview:

In addition to his book, I enjoyed asking the Senator about his own life and success.  I definitely had to ask him about his unorthodox basketball training.  He grew up with no one to play with, and so he devised a clever way to practice basketball.  Practicing jumps with weights in his shoes, putting cardboard in his glasses so he could not look down, and dribbling through stacked chairs were some of the ways he was able to excel.

The Success of the Knicks

I also loved his answer to why the Knicks were so successful, winning two World Championships.  He pointed to two factors:

He said, “One of us was only one point on a five point star and we realized that no one of us could be as good as all five of us playing unselfishly.”  What great advice for any team from a basketball court to the boardroom.  It made me think:  What if we were selfless as a team, relied on each other’s strengths and used our collective imagination?  What could be possible for your team at work?

We realized that no one of us could be as good as all of us playing unselfishly. -Bill Bradley

As with any book with a strong point of view, I don’t agree with every point or solution Senator Bradley offers.  But, I like to study and read books from both sides of the political aisle.  And that’s the great thing about Senator Bradley.  He welcomes discussion and debate.  His goal is simply to get more people involved in that conversation.  To join the conversation, you can follow Senator Bradley on Twitter @BillBradley or use the hashtag #dobetter.  In election years, our country can appear divided.  Let’s all try to be respectful of the other side, and focus on a better future.  After all, we can all do better.