How to Lead in the Moment

Leaders today must be quick on their feet, have a ready answer, and operate at net speed.

Your credibility drops with ums and ahs.

Your leadership brand is sullied by blank stares or unclear answers.

I know that I often credit my extemporaneous speaking to my early forensics club in high school and college, skills that I depend on every single day as the CEO of a global organization. It’s not something you’re born with, but something you can learn through careful practice and preparation.

Judith Humphrey, in her new book, Impromptu: Leading in the Moment, provides a perfect opportunity for every one of us to up our game and improve our skills. I’m always on a quest to improve my skills in this area, and that’s why I welcomed her book into my self-development arsenal.

I followed up with Judith to talk about her work in this area. Judith Humphrey is founder of The Humphrey Group Inc., a top tier communications firm. For over thirty years, she has been a communications coach and speaker. She’s also a columnist for Fast Company.

The Importance of Extemporaneous Speaking

Why is extemporaneous speaking so important?

Off-the-cuff remarks have become the new normal for business leaders. Organizations have flattened, and knowledge and decision-making are decentralized. Not long ago, messages were delivered from “on high.” Only those in the C-suite seemed to be empowered. Now leaders at all levels are speaking out and communicating in a more open, authentic, and informal manner.

Such everyday communications involve leading in the moment and speaking spontaneously. This is leadership in the organization of the twenty-first century. It takes place in corridors, elevators, meetings, interviews, networking events, and chats. Many small stages have replaced the big stage, and impromptu communication has become far more important than scripted speaking.

“Good impromptu speaking is a matter of words, scripts, and presence.” -Judith Humphrey

Most people think impromptu speaking would be an innate skill; you have it or you don’t. But you point out that it’s a skill you develop. Would you share some historical examples of people who practiced their extemporaneous speaking skills?

History provides many examples of individuals who faced the challenge of impromptu speaking—and discovered how to measure up to that challenge.

Abraham Lincoln told young lawyers that “extemporaneous speaking should be practiced and cultivated.” He showed his own gifts as a spontaneous speaker in the famous Lincoln-Douglas debates. Mark Twain talked about needing several hours to prepare an impromptu speech. Winston Churchill also believed in the value of preparing impromptu remarks. In one oft-quoted example, he paused before exiting his car as his driver opened the door for him, saying, “Please wait a moment, I’m still going over my ‘extemporaneous remarks.” Lou Gehrig prepared for his “Farewell to Baseball” speech, but did not read a text–he spoke spontaneously and without notes. And one of the greatest examples of prepared spontaneity is Martin Luther King’s “I Have a Dream” speech, in which he improvised the centerpiece of the speech.

Even though we think of impromptu speaking as winging it, we do ourselves a disservice when we don’t prepare. In fact, the word “Impromptu” derives from the Latin in promptu meaning “in readiness.”

The impromptu mindset begins with intention – the willingness to see every situation as a potential leadership opportunity, whether it is an encounter in the corridor, an exchange in the elevator, or a comment interjected in a meeting dialogue. This intentionality is paramount for any leader who wants to make the most of impromptu opportunities.

Beyond that, the impromptu mindset includes the willingness to listen—to be engaged in what others say. Listening is critical if one is to avoid the one-way monologue that defined traditional executive communications.

The impromptu mindset also involves authenticity. Never before have leaders had to be so open with their audiences. Authentic leaders are comfortable in sharing their ideas, values, beliefs, vulnerabilities, and stories.

Finally, the impromptu mindset includes respectfulness and the ability to focus: everyday audiences need to be respected because each encounter involves—and can strengthen—a relationship. And in speaking off-the-cuff it’s critical to focus, because your impromptu audiences expect you to be there, truly present, for them.

“The most successful executives and managers see every encounter as a potential leadership moment.” -Judith Humphrey

How do you read your audience in advance? 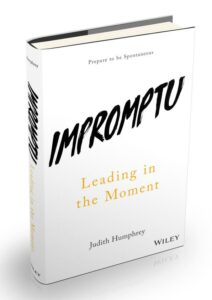 The best impromptu speakers know their audiences well.  They understand what drives them, what ideas will engage them, and how they can best be reached. This thought process needs to happen whether you are heading into a networking event, a Q&A with investors, a meeting with your team, or a one-on-one conversation in the elevator.

When “reading” a group in advance, decide who is the person or persons you really want to reach. In a meeting it might be the most senior person; in a networking event, it will be someone you want to influence. In a client pitch, it will probably be the key decision-maker.

Can you do all this “on the fly?” Not always. That’s why it’s important to prepare in advance and study the people you’ll be meeting.

“The formula for a successful impromptu tribute or toast is simple: be positive, do your research, and use the Leader’s Script.” -Judith Humphrey

Talk about meetings and how these skills apply.

Strong extemporaneous speaking skills help create first-rate meetings. Let’s say a leader wants to bring forward an idea and get the group on side. She’ll want to use her best impromptu skills to gracefully get to her point, make a strong case, and rally the room with a good call to action.

Leaders should also be prepared to scale their remarks to the timeframe allowed. When the boss says, “Just give me the big picture, I only have five minutes,” they should be prepared to concisely present the message and main point.

Good impromptu Q&A skills are critical in meetings, since so much of meeting time is spent in these exchanges. Leaders need to get to the point and make their case. They also need to avoid traps. In handling Q&A keep these fundamentals in mind:

The Importance of Preparation

You’ve helped prepare people to speak spontaneously and yet naturally. Talk about the importance of preparation.

Preparation is everything. Even though many people think of extemporaneous speaking as “winging it,” there is a huge danger in doing so. If we don’t prepare, our words come out with “um’s” and “ah’s” and with empty expressions like “to be honest,” and “I’m not sure but…” Beyond these filler expressions is the tendency to ramble until the speaker figures out what he or she is talking about…concluding with “so my point is.”

Preparation is key if you want to avoid these missteps.  You’ll want to have a prepared mind geared to leadership and listening, a keen sense of your audience, a template that organizes your arguments, and finally, an understanding of what presence is and how to achieve it on the spot.

You give examples of body language from the CEO who was practicing to a whole chapter on mastering body language. What are some ways to get body language under control so it’s a powerful asset to your communication?

Your stance, gestures, tone, and eye contact are all of great importance in off-the-cuff speaking. To achieve the best body language, practice the following:

FREE Leadership Guide and other materials for ordering now.

For more information, see Impromptu: Leading in the Moment.

How to Recruit Rockstars

How to Believe In Yourself