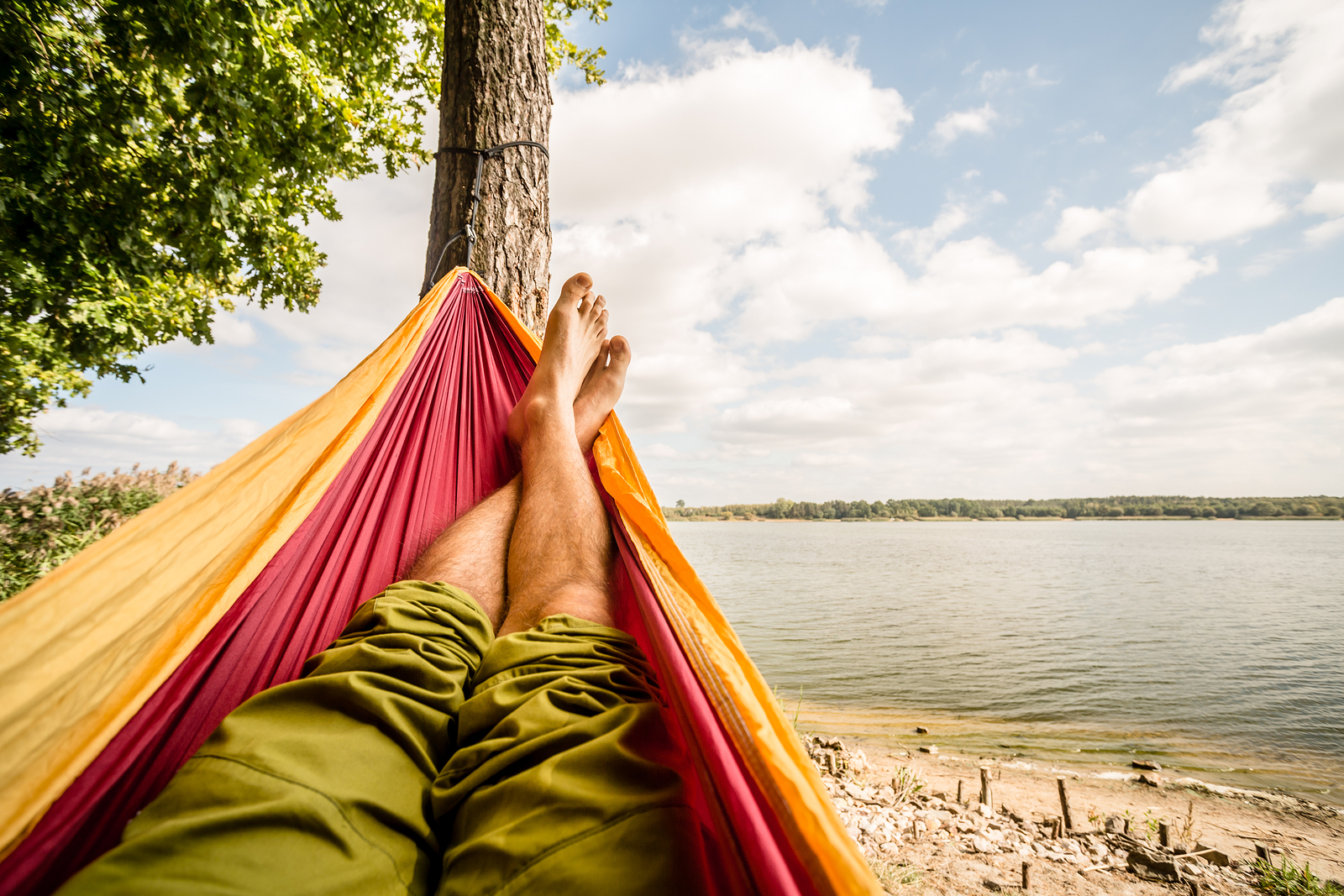 What if you stumbled on an ancient practice that would give you more productivity, more creativity, and more energy, while giving you less stress, less anxiety, and less sickness?

You’d be intrigued to learn as much as you can about it, I am sure.

I was pulled into Aaron Edelheit’s new book, The HARD Break: The Case for a 24/6 Lifestyle, from the very first pages where he outlines the benefits of taking one true day off from our hectic pace each week.

Deep down, I think all of us know that what we’re doing isn’t exactly good for us and isn’t exactly helping us be our best selves. We are overly-stressed, under-slept, chronically anxious as a society. We are never shutting down. Work follows us home and home follows us to work. Few places on the planet allow an escape from the Internet anymore.

And so, Aaron’s compelling research into the idea of taking the Sabbath, a day off each week, in a tradition that is thousands of years old was definitely intriguing.

Is it possible to actually do it?

I asked Aaron to share his personal experiences and his research. If the idea intrigues you, I encourage you to get his book to learn more. You’ll be glad you did.

“Beware the barrenness of a busy life.” -Socrates

What are some of the negative effects we are seeing from our technology-enabled, always-on society?

Want an 80% increase in the risk of coronary disease? Work more than 10 hours a day. What about stress? Would you like to experience more stress than 57 percent of Americans? Then be sure to check your emails and texts on the weekends and non-work days.

And when you have your phone on all the time and you check it constantly, you effectively are “on call” to the world. A 2015 University of Hamburg study found that extended work availability, or being on call “has a negative effect: dampening mood and increasing markers of physiological stress.” Most notably, the stress carries on into the next day, even when people are no longer on call or working. The most important conclusion of this study was “that the mere prospect of work-related interruptions during free time can exacerbate stress.”[i]

And it’s not just traditional work that we are connected to. We are also connected to every Facebook friend, Twitter follower, Instagram feed, and more. According to one study, the temptation to check the Internet “was harder to resist than food or sex.”[ii] When technology has a more powerful pull than the most basic human needs, we might start to worry.

“To make no mistakes is not in the power of man; but from their errors and mistakes the wise and good learn wisdom for the future.” -Plutarch

All of this is leading to some pretty serious mental health problems. Consider that disability awards for mental disorders have dramatically increased since 1980. Substance abuse, especially of opiates, is at epidemic levels.[iii] Mental health problems are becoming a significant burden for society. According to the Partnership for Workplace Mental Health, mental illness and substance abuse cost employers an estimated $80 to $100 billion annually. The World Health Organization has named depression as the number one disease burden for the economy worldwide.[iv]

There are 200 footnotes in my book and that is after cutting many studies out. I had to work hard not to make my book a scientific journal of the problems stemming from working too much and being online 24/7.

“No man needs a vacation so much as the man who just had one.” -Elbert Hubbard

For those who haven’t yet read your book, what is a “hard break”?

A hard break is a Sabbath, or distinctive break from work and technology. This means the phone is off, the computer is off, and I try not to talk about business for one whole day. Some people take Friday, others Saturday, Sunday or even a Tuesday. I personally take Friday night to Saturday night off. Some choose not to take a full day but turn off a few hours a day to be with their family, and then reconnect. 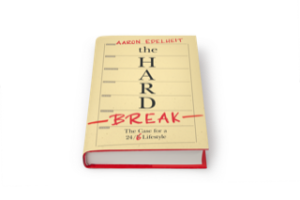 The goal is to give your brain and your body a break from constantly either working or being connected 24/7. It is also a break from running around from one activity to another without a pause. You should be striving for something different from what you do on every other day of the week.

Are we willing to just accept our electronic leashes and the constant demands they make of us?

Why do Americans in particular resist taking breaks or even taking vacations?

I share lots of research about the benefits of time off and vacation and the dangers of overwork. Yet last year, Americans gave up close to 700 million paid vacation days. It is insane, and unlike other countries, it is a part of our culture and one of the reasons I wrote my book.

There are several reasons I explore in the book including how extreme work schedules and habits have become status symbols. Fear of being non-essential is another reason. The most fascinating reason is the Zeigarnik effect, which is a psychological effect in which incomplete tasks stay on our mind. With all of the emails and tasks that never end, we feel compelled to finish those tasks.

Many people are so addicted to being “on” that they cannot imagine successfully disconnecting. What benefits have you seen from your practice of taking a hard break?

The American Psychological Association identifies people who do this as “constant checkers.” In a survey of Americans’ tech-related stress levels, the APA found that 65 percent of respondents acknowledged that taking a “digital detox” is important, but only 28 percent of those actually followed through by turning off and taking a break.[vi]

The benefits of taking a hard break or a Sabbath are numerous. They include lower stress, rejuvenation, more creativity and new ideas, and better health—even food can taste better!

I’ve also experienced greater connection to my family and friends. Imagine having one day of vacation every week? Who doesn’t want that?

What does current science say about this ancient practice?

The coolest research is the latest from the world of neuroscience that shows that when you are resting, a part of the brain called the default mode network goes into overdrive. The default mode network is the part of the brain that tries to gain understanding from experience and form patterns of thought. So, by not resting, we aren’t giving our brains time to form patterns of thought and to gain deeper understanding of our experiences. To succeed in the world today requires us to be more creative and innovative. Amazing that the value of a tradition thousands of years old is validated by the latest in neuroscience research.

“The price of success is hard work.” -Vince Lombardi

As you’ve begun to spread the message of this purposeful pause each week, is there a story of someone that you can share where it has made a difference?

The story of David Sullivan, the former Chief Operating Officer of my last company, The American Home. I’ve never seen someone grind as hard as he did. He almost completely burned out.

He has started his own company, and what did he implement in his life before embarking on the crazy adventure of a startup? A Sabbath. He is finding it invaluable to getting his startup off the ground and as a tool to balance work demands with family life.

“It has become appallingly obvious that our technology has exceeded our humanity.” -Albert Einstein

Would you share the names of some other successful individuals who see the benefits of taking a hard break?

I mention several in my book, including prominent venture capitalist Brad Feld, movie producer Devon Franklin, author and business professor Clayton Christensen and more. Read my book to learn their stories and also to learn how you can implement a hard break or a Sabbath in your life.

I agree. The book is terrific! The HARD Break: The Case for a 24/6 Lifestyle

“If you go dark on vacation, you will be ready for the light when you return.” -Brian Scudamore

For more information, see The HARD Break: The Case for a 24/6 Lifestyle.

[i] Alex Fradera, “The Psychological Toll of Being Off-Duty but ‘On Call.” The British Psychological Society Research Digest, September 10, 2015. http://digest.bps.org.uk/2015/09/the-psychological-toll-of-being-off.html