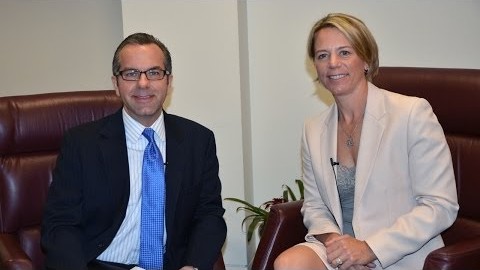 Annika Sorenstam is perhaps the greatest female golfer of all time.  Her many awards include ten Major Championships, 8 Player of the Year Awards, and 89 worldwide wins.  In 2013, the PGA of America named her the First Lady of Golf.  She’s the only female golfer to shoot a 59 in competition.

“There are no shortcuts to success.”  -Annika Sorenstam

Though Annika stepped away from competitive golf in 2008, she remains busy with commercial and philanthropic activities.  Her ANNIKA Course Design firm is busy around the world creating challenging courses everywhere from China to South Africa.  The ANNIKA Academy in Orlando is teaching players of all ages.  She is the creator of the ANNIKA Collection with Cutter & Buck.  She even created an accounting firm, ANNIKA Financial Group.  Outside of her business interests, there is the ANNIKA Foundation designed to help junior golfers.  She is active on Twitter and dedicated to her family.

“It just shows how you should never give up.” –Annika Sorenstam

Recently, I had the opportunity to meet Annika and her husband, Mike McGee.  In this brief 6 minute video, Annika shares:

“You just have to try and keep on grinding and hope that things will turn around eventually.” -Annika Sorenstam

“I was really never in any trouble.” –Annika Sorenstam

“I think it’s important for me to play well and set the tone.” –Annika Sorenstam

“If you think about it, the golf ball doesn’t know which country you’re in.” –Annika Sorenstam

“We have a challenge ahead of ourselves. You only get a chance so many times.” –Annika Sorenstam

5 Tips to Avoid a Branding Collision