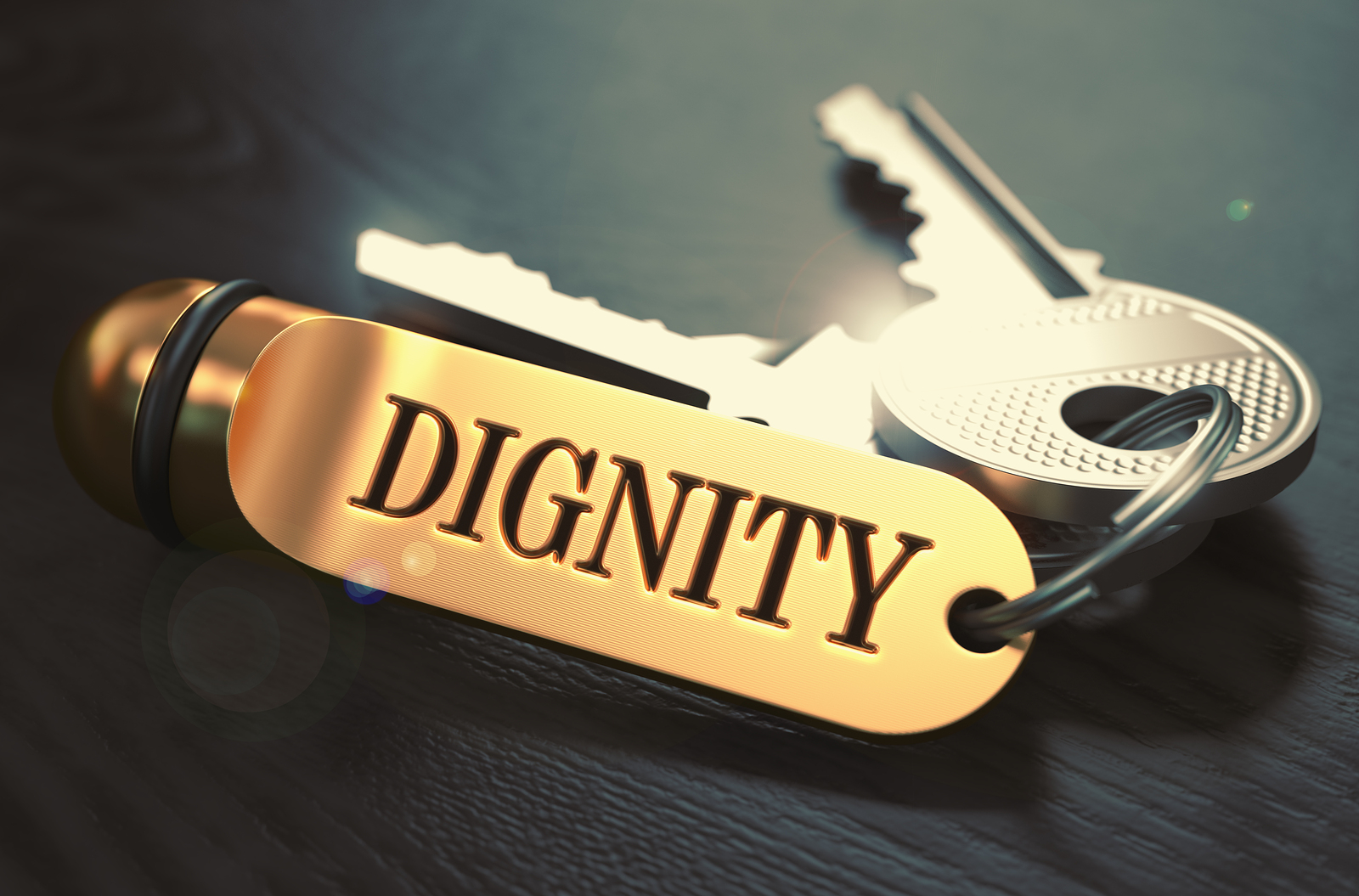 When a copy of Leading with Dignity landed on my desk, I was intrigued for a couple reasons. First, the author, Donna Hicks PhD, did not fit the profile of a typical business management book author. Her background is in international conflict resolution—she has, for 25 years—worked in some of the most conflict-ridden areas of the world, including Northern Ireland, with Archbishop Desmond Tutu, Syria, and the Middle East.  What is a conflict resolution specialist doing writing a book about business leadership?  I wondered and was excited to learn more. I love learning from non-traditional approaches and a different perspective.

Second, the word “dignity” intrigued me. Dignity can be perceived as a soft, abstract idea. It’s not a standard buzzword in conversations about workplace and company culture. Yet, Hicks says that an understanding of dignity and how to honor it is an essential role to good leadership. In the book, she highlights three components of leading with dignity: what one must know in order to honor dignity and avoid violating it; what one must do to lead with dignity; and how one can create a culture of dignity in any organization, whether corporate, religious, governmental, healthcare, or beyond.

She uses hundreds of interviews, research in psychology, and real-life case studies to illustrate how leaders and managers can better understand dignity and transform their workplaces.

We spoke about her research.

“The most toxic workplaces in which I have consulted are those with unaddressed and unacknowledged dignity violations and the gossip network is alive and functioning well.” -Donna Hicks

Born to be Vulnerable

What’s your definition of dignity? What does it look like to treat someone with dignity? 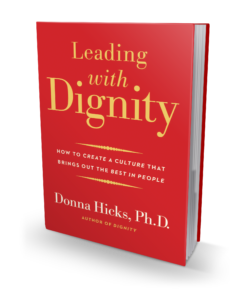 My definition of dignity is simple; it is our inherent value and worth.  We are all born with it.  At the same time, we are born vulnerable to having it injured, just like a physical injury.  From my research, I have developed the Ten Elements of Dignity, ten ways to honor it in ourselves and others:  Acceptance of Identity–people want to be treated well no matter their race, religion, ethnicity, gender, or sexual orientation; recognition—for their hard work and a job well done; safety—make people feel safe both physically and psychologically so they feel free from humiliation;  acknowledgment—for the suffering they have endured if treated badly; fairness—to be treated in an even-handed way; inclusion—make people feel a sense of belonging; understanding—don’t rush to judgment; give people a chance to share their perspective; independence—avoid micro-managing; benefit of the doubt—treat people as if they were trustworthy; and accountability—apologize when you have caused someone harm.

“The most exciting breakthroughs of the twenty-first century will not occur because of technology, but because of an expanding concept of what it means to be human.” -John Naisbitt

What do most people get wrong when thinking about it?

The most common misconception about dignity is that it is the same as respect.  Dignity and respect are very different.  Dignity is something we are born with—our inherent value and worth.  We don’t have to do anything to have dignity. Every human being deserves to be treated with dignity, no matter what they do.  Respect, on the other hand, has to be earned.  If I say I respect someone, she or he has done something special to deserve my admiration.  I say to myself, “I want to be like that person. She is a role model for me.”

“The price of greatness is responsibility.” -Winston Churchill

What are some ways to avoid violating someone’s dignity?

When I speak with people about dignity, they all agree that it is important, but most do not understand what it is, or what it looks like to treat people with dignity.  We have a collective ignorance about all matters related to dignity.  Because of the ignorance, even good people with good intentions can violate others without knowing it.  Even though we are all born with dignity, we are not born knowing how to act like it. We have to make the time and put in the effort to learn what it is, how to treat others with dignity (Ten Elements of Dignity) and how to put it into practice every day of our lives. Dignity education is essential to avoid calamities in our relationships.  Healthy relationships in all aspects of our lives are those that are mutually honoring of each other’s dignity.

“When people have been roughed up, they need acknowledgment for the suffering they have endured.” -Archbishop Desmond Tutu

You have extensive experience in international conflict. What are a few key lessons that translate into the corporate environment?

The biggest lesson I have learned is that when people have their dignity violated, no matter whether it is at the international level or at the person level, it creates conflicts and relationships suffer.  When I consulted in the corporate world, I found that the conflicts I was hired to address had, at their core, the same root cause—unaddressed violations of dignity.  When I explained the dignity approach to them, they all agreed that there were festering dignity wounds creating the toxic conflicts in their work environments.

“When I consulted in the corporate world, I found that the conflicts I was hired to address had, at their core, the same root cause—unaddressed violations of dignity.” -Donna Hicks

What’s dignity consciousness and what steps can one take to develop it?

Dignity consciousness is the result of educating oneself about dignity and the important role it plays in our lives and relationships.  As I mentioned above, the ignorance most of us have about all things related to dignity is no wonder because nothing in our educational system addresses this important aspect of our social development.  My hope is that my book will help people become more aware of how to honor it in others and develop the skills necessary to lead their lives with dignity.

“Trust is the lubrication that makes it possible for organizations to work.” -Warren Bennis

Talk about the relationship between vulnerability and dignity.

As I mentioned above, it is important for us to understand that wounds to our dignity are as real as a physical wound.  Research has shown that when our dignity is violated, it shows up in the brain in the same area as a physical wound.  Dignity violations are real and experienced as painful and humiliating.  Our vulnerable dignity needs to be protected in the same way that we protect our physical well-being.  Another aspect of dignity and vulnerability is that the practice of protecting our own dignity and the dignity of others requires us to make ourselves vulnerable.  For example, if we make a mistake, or violate someone’s dignity, our knee-jerk reaction is to save face and cover up our bad behavior.  Even though we may feel that we are protecting our image in the eyes of others by doing so, the fact is we are not telling the truth and are violating our own dignity in the process, not to mention violating the dignity of others.  Part of dignity consciousness is accepting that vulnerability is where the truth lies, and if we want to be true to our dignity, we need to take responsibility for our actions. 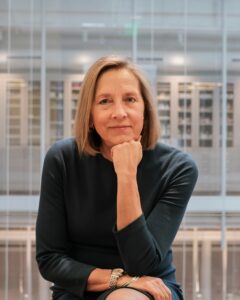 The obvious first sign is conflict.  People who have had their dignity violated, without a way to productively address the violations, end up withdrawing from the relationship or fighting with the person who did them harm.  Another related consequence is gossip.  When people have had their dignity violated and they do not feel safe to speak up to the person who violated them, they resort to gossip to get even.  Talking negatively about a person is a quick way of punishing the perpetrator without having to confront him.  The most toxic workplaces in which I have consulted are those with unaddressed and unacknowledged dignity violations and the gossip network is alive and functioning well.  The lion’s share of my work in cases like this is to do a system-wide dignity education project where everyone in the organization learns about dignity, including how to manage dignity conflicts productively and to speak up to the people who violate dignity instead of resorting to demeaning gossip.

“It is important for a leader to make sure that everyone in the organization gets dignity education. The directive needs to come from the top.” -Donna Hicks

How does a leader best coach someone who routinely violates another person’s dignity?

It is important for a leader to make sure that everyone in the organization gets dignity education.  The directive needs to come from the top.  In addition to dignity education, a leader needs to model how to treat people with dignity and how to address violations in a way that doesn’t end up violating others.  Knowing how to give feedback is a critical skill in knowing how to lead with dignity.  At the same time, leaders have to be willing to accept feedback from their employees. It is a two-way street.  If a leader models how to receive feedback, she makes it easier for those delivering it to speak up and feel safe to discuss the dignity injury they have experienced.