How Mets Pitcher R.A. Dickey Overcame Obstacles On & Off the Field 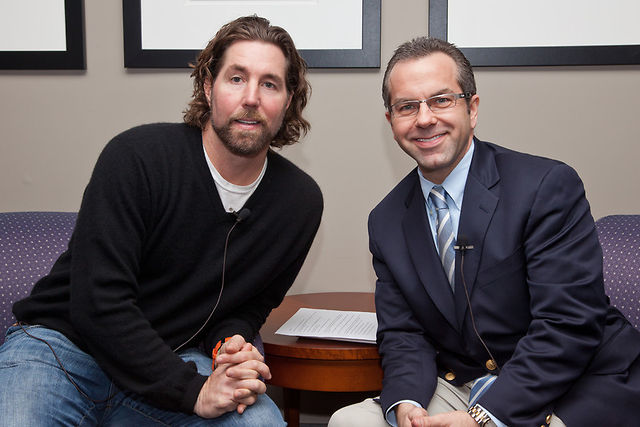 “You may hit me.   You may knock me around and knock balls out of the park.  But I am always going to get back up and keep coming at you.”  — R.A. Dickey

How many of us have this type of attitude no matter what trials we are facing?

Several weeks ago, I had the opportunity to talk and have lunch with Mets pitcher R.A. Dickey.  It was our first meeting, but I had already met him in the pages of his new book, Wherever I Wind Up.  His story is both heartwarming and heartbreaking.  When I finished the book, I flipped back to the beginning and re-read the words in the quote above.  R.A. captured the essence of his life in those sentences and his ability to persevere through almost anything.

Baseball enthusiasts may know his unusual path to his position as starting pitcher for the New York Mets.  He was a No. 1 draft pick of the Texas Rangers.  Complete with a signing bonus of over $800,000, he thought his successful baseball career would only go up.  His dream turned into a pitcher’s nightmare:  the discovery that he was missing his ulna collateral ligament (ucl) in his right elbow. 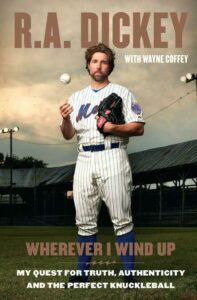 It would be inspirational enough to read about how he was able to overcome this setback and end up in one of baseball’s top positions.  But his life’s journey and the lessons you learn from it go far beyond baseball.  As a boy growing up in Nashville, R.A. had a childhood filled with challenges:  his mother’s addiction to alcohol, the divorce of his parents, and child abuse.  By the time R.A. was dealing with a missing ucl, he was already accustomed to setbacks and challenges.

After reading the book, I couldn’t wait to meet him.  R.A. is one of the most likable and modest people you could ever meet.  In this video interview, you will see the brokenness and humility, but you will also hear his remarkable determination.  We talk about everything from his recent use of social media and Twitter to how his Christian faith helped him during difficult times.

Here are just a few character traits I noticed:

This inspirational book is not only for sports fans but also for anyone interested in success and leadership.  There are not many books that I can say that I am quoting something to my wife in the morning, reading a passage to my staff in a meeting in the afternoon, and telling a friend about something in the evening.  This is one of those rare books.

We’re giving away several signed R.A. Dickey baseballs.  What do you have to do?  Just leave a comment below, and you will be entered into our random giveaway.

Update: Winners have been notified – thanks for reading, commenting, and sharing!

Innovation Expert Jeff DeGraff on Building a Better YOU

Don’t Let Others Determine Your Value