25 Quotes to Build a Winning Team

You Win in the Locker Room First

A few months ago, I read Jon Gordon and Mike Smith’s book, You Win in the Locker Room First: The 7 C’s to Build a Winning Team in Business, Sports, and Life. 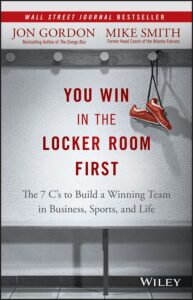 The former NFL head coach of the Atlanta Falcons, Mike Smith, teamed up with one of my favorite authors, Jon Gordon, to explore seven principles that teams use to reinvigorate and reinvent their future.

I’m not sure how you read, but the more I like a book, the more underlines, highlights, and dog-eared pages appear. Long ago, I developed the habit of doing this because I want the wisdom of the authors to penetrate my thick skull and make an impact. When I read this book, there were so many quotes that stuck with me.

So, instead of an author interview, I wanted to share the top 25 Quotes from this book on team building that stuck with me. I hope you find them helpful as you build a great team of your own. Because, as the title of this book reminds us, winning starts long before you actually take the field.

25 Quotes to Build a Winning Team

“Culture is defined and created from the top down, but it comes to life from the bottom up.” –Mike Smith

“Winning doesn’t begin just in the locker room; it also begins in the mind.” –Jon Gordon

“You win in the mind first and then you win on the field or court.” –Jon Gordon

“Leadership is a transfer of belief.” –Jon Gordon

“The leaders of the team or organization set the tone and attitude.” –Mike Smith

“What we think matters. Our words are powerful.” –Mike Smith

“The character you possess during the drought is what your team will remember during the harvest.” –Mike Smith

“To build a winning team, you want to be consistent in your attitude, effort, and actions.” –Jon Gordon

“One of the keys to listening and communicating is to ask the right people the right questions.” –Mike Smith

“Connection is the difference between a team that thrives and one that crumbles.” –Jon Gordon

“When team members connect and build strong relationships, they don’t just work with each other. They work for each other.” –Jon Gordon

“The connection you create today will be the bond that strengthens your team tomorrow.” –Mike Smith

“When we hear from a leader, we will learn; but when we feel a leader’s commitment, we will be transformed.” –Jon Gordon

“A team feels a leader’s commitment when the leader takes the time to serve them.” –Jon Gordon

“The team will function more effectively when it has leaders and team members who refuse to blame their teammates.” –Mike Smith

“To build a winning team it’s essential to build a culture of caring.” –Jon Gordon

“If you want to build a winning team, you must value all team members for who they are, not just what they do.” –Mike Smith

“When you care, your team will care.” –Mike Smith

“Future success is determined by what you do today.” –Jon Gordon

“Everyone can leave a legacy by the way they lead and the impact they have on others.” –Mike Smith

If you are looking for more quotes on teamwork, click here.

You Win in the Locker Room First: The 7 C’s to Build a Winning Team in Business, Sports, and Life

Don’t Listen to the Dream Killers

Draw Your Dreams Into Reality