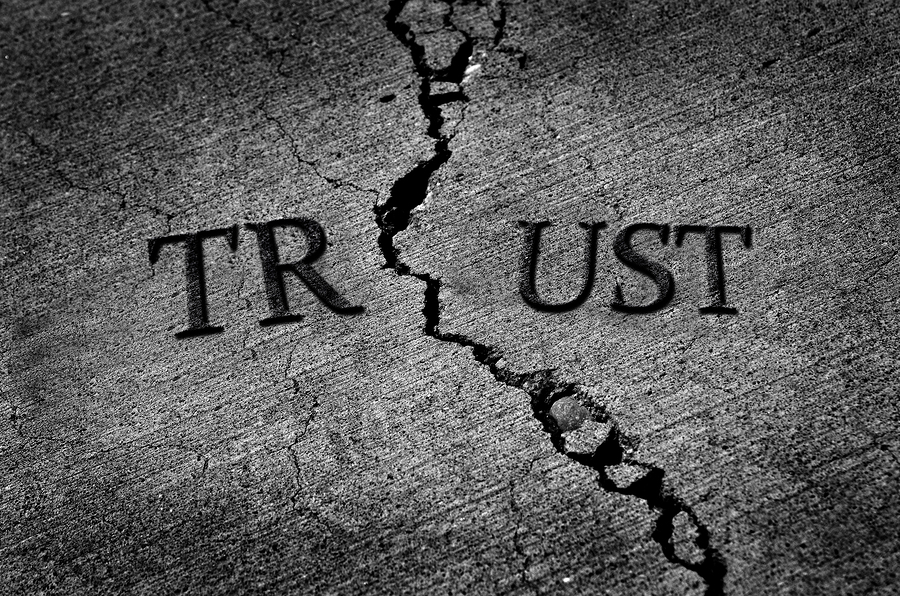 This is a guest post by friend, executive and mentor Bruce Rhoades, who retired after having run several companies. He often helps me with strategy. I am delighted that he is a regular contributor. Follow him on Twitter.

How to Kill Trust

Trust—so hard to gain, yet so easy to lose! Trust is an important part of any relationship, but it is the foundation for successful leadership. Without trust, leadership is simply hollow. There has been a lot written about the importance of trust and how to build trust with others. However, what many leaders do not realize is that trust is often undermined, or even lost, through simple behaviors. After paying so much attention to ways to gain trust, it is often lost inadvertently.

There are many ways that a leader can kill trust. Most are behaviors or actions and not overt statements. It is rare that a leader simply states, “I do not trust you” to someone. Yet, it is quite common that a leader will kill trust with one or more of the following behaviors.

“It takes 20 years to build a reputation and 5 minutes to ruin it.” –Warren Buffett

Delegate tasks, not problems:  When delegating, provide a strict framework and task list while telling them exactly what needs to be done and how to do it. By not providing others with the opportunity to help solve a problem or shape an initiative, it sends a message that they are not trusted and do not have the confidence of the leader.

Leadership Tip: Delegate the problem and let the team shape the initiative.

Micromanage:  Constantly ask for updates, status and progress while dictating more about how to do the task. React strongly if there is any issue or problem. Second-guess any decisions or actions during the project. Constantly ask if they remembered to do something or if they are working on something. If something needs to be corrected, say, “I’ll take care of that” or have some else do it. By not demonstrating any confidence in a team member to complete an assignment, trust will be damaged.

“The ability to influence a leader is at the heart of feeling trusted.” –Bruce Rhoades

Never ask their opinion:  Do not ask for input on an assignment; just dictate what to do. Discount what team members are saying, especially while they are talking. Require more justification with greater detail than expected of others – especially in public. Do not allow them to influence you. The ability to influence a leader is at the heart of feeling trusted. When influence is denied, trust is eroded.

Do not recognize good performance:  By not giving positive feedback in public or private settings, the leader is signaling that the person is not a good performer, is not trusted and that there is a lack of confidence. No one does their best work if they think the leader does not value their contributions. When the leader always keeps a team member in doubt, that person will not trust.

Never give a “stretch assignment”:  Never appoint them as a member of a task force or a project outside their job responsibilities. Do not provide a growth assignment. Stretch assignments signal confidence in the team member and also show a willingness to invest in the growth of the team member. By denying any development opportunities, distrust is fostered.

Overreact to mistakes:  Everyone makes mistakes, but when a leader overreacts by “shooting the messenger,” saying things like “not again,” or does not use the mistake as a learning experience, trust is killed.

“People follow leaders by choice. Without trust, at best you get compliance.” –Jesse Lyn Stoner

Have someone else monitor:  Nothing kills trust quite as much as finding out someone else has been asked to keep an eye on you, check your progress or report to the leader when you make a mistake.

Lie or withhold information:  Outright lying, or telling different stories to different people, will almost always be discovered and undercut trust. Likewise, it always signals distrust when a leader withholds information that a person needs to do their job or make a decision. When someone makes a decision or recommendation to the leader only to find out there are “other considerations,” or they got a different story than others, trust is eroded every time.

“Trust is built and maintained by many small actions over time.” –Lolly Daskal

Publicly exclude from the “Inner Circle”:  When a leader has a select group, or inner circle, for advice, but then publicly makes it known that someone is excluded, trust is killed.

Do not be transparent:  Good leaders are transparent and forthcoming about issues, concerns, organizational values and top priorities. It is also important for a leader to have some personal disclosure regarding organizational issues and development. There’s nothing worse than the feeling that leaders don’t care about keeping you in the loop, or even worse, that they’re not giving essential contextual information or are keeping secrets.

Multitask during conversations:  When a leader multitasks during a discussion, it signals that they are not listening and what the person is saying is not important or—even  worse—it is not worth listening to the person talking. The same is true if the leader whispers things to others during a discussion or presentation. Even worse is to simply leave a meeting while someone is presenting/talking without any explanation. Ignoring someone will always destroy trust.

Throw others under the bus:  When a leader does not back up the team in public, but places the blame on someone else for selfish reasons or to preserve their own self-esteem, it obviously does not build trust. When it is always someone else’s fault, a leader destroys trust.

Take credit for ideas:  When a leader takes credit for the results and ideas of others, it is always an action that kills trust and causes animosity.

Have hidden agendas:  When leaders appear to have a secret reason or ulterior motive for doing something, it makes people wonder if they are being used or manipulated. Hidden agendas usually become apparent in the end and then trust starts to erode.

“Trust is the glue of life.” -Stephen Covey

Say one thing but do another:  By saying, or agreeing, to one thing but actually doing another without explanation, a leader appears deceitful and sows distrust quickly.  The deceptive “pocket veto” also falls into this category: agreeing to take an action but subsequently doing nothing. It only takes one clear instance of this type of deceit to break trust.  If you find that you have done it, quickly explain your action.

When a leader exhibits any of these trust-killing behaviors, it not only undermines the trust of the team member directly involved but also threatens the trust of other team members. Even when not done in public, the word will spread among the team and damage the environment for trust.

It is very easy to torpedo trust—sometimes inadvertently—as during a situation with high pressure or visibility. As a leader, if you think you have damaged trust with any of these behaviors, the best course of action to re-gain trust is to admit the mistake, take responsibility, apologize if necessary, and visibly change the behavior.

Trust is created over time with consistent actions, but it can be weakened easily and quickly. Leaders must be ever-conscious of their behaviors and the effect of those behaviors on individual team members or the whole team. Once lost, trust is even more difficult to recover.

“Trust is created over time with consistent actions.” -Bruce Rhoades