It is ushering in a new age, redefining what’s possible, bringing machines to life. What should organizations do? What about government policy? How do we plan in the midst of the changes?

In Prediction Machines: The Simple Economics of Artificial Intelligence, three esteemed economists tackle these questions and more. The authors discuss AI in the context of prediction. One of the authors, Joshua Gans, recently shared his view of AI from this research.

“Some people worry that artificial intelligence will make us feel inferior, but then, anybody in his right mind should have an inferiority complex every time he looks at a flower.” -Alan Kay

Many people are only now beginning to see AI in the form of Alexa or Google Home. What do you expect over the next few years in terms of growth and how it will be prevalent in our lives?

While it is hard to forecast these things, I suspect AI will be largely invisible to most consumers. Businesses will use it to plan inventory and make logistics more efficient. That may show up in high quality products for a lower price, but it is unlikely anyone will say ‘ah ha! AI.’ In other words, I don’t expect to see Jetsons-like robots walking around any time soon.

What are some of the most common misconceptions about the technology?

The big misconception is that technologists are often too optimistic about progress in the near term and too blinded by the speed of progress later on. We are still in the near term on AI, so there is lots of optimism. But there is much to be worked out in terms of how to make the technology work for us. Once we do that, the optimism will be justified. It is just likely to be a few years later than people expect.

What is prediction? And, as its cost drops, what should we expect?

“The development of full artificial intelligence could spell the end of the human race.” -Stephen Hawking

You unpack decision-making and show the odds. For instance, to answer the question, “Should you take an umbrella?” you have a flowchart and demonstrate decision-making. How will AI have an impact on decisions like this? 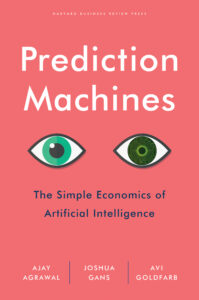 AI makes decisions more optimal and less default. Without a prediction on the weather, I either choose to carry an umbrella in my bag or I do not. Once you have a prediction, you can tailor your decision to that prediction — e.g., only carry if the forecast says there is a good chance of rain.

So this may help one of my friends who struggles with an ordering decision at a restaurant?

Conceivably, yes. Your friend may tell some app about past decisions made and whether they have been good or bad. The app can then look at a menu and predict what would be a good choice. Then again, your friend will have to trust the app and also trust their own past assessments of their choices!

You share the story of Tesla and how an accident was avoided. Are these examples what will make us comfortable giving up full human decision making?

Absolutely. Opinions differ on this, but I suspect there are a good lot of people willing to admit that an automated driver might be better for them. Stories like this will reinforce that. Ultimately, that coupled with evidence-based government regulation will do the trick.

“A year spent in artificial intelligence is enough to make one believe in God.” -Alan Perlis

Would you share some of the society implications in coming years? 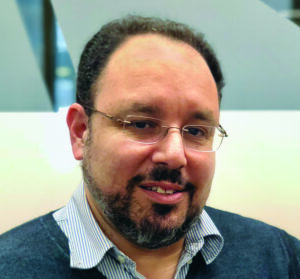 In the coming years, as I said, it is mostly under the hood. That may affect some jobs, but to displace workers, you usually have to have other reasons to automate than just that you prefer machines to people. AI will make that more likely in some places, but experience tells us it will enhance the productivity of people in many others. These effects will likely offset although there may be some temporary disruption to some people and sectors.

Become an Athletic CEO to Lead in Turbulent Times

Build a Powerful Culture of Freedom and Responsibility