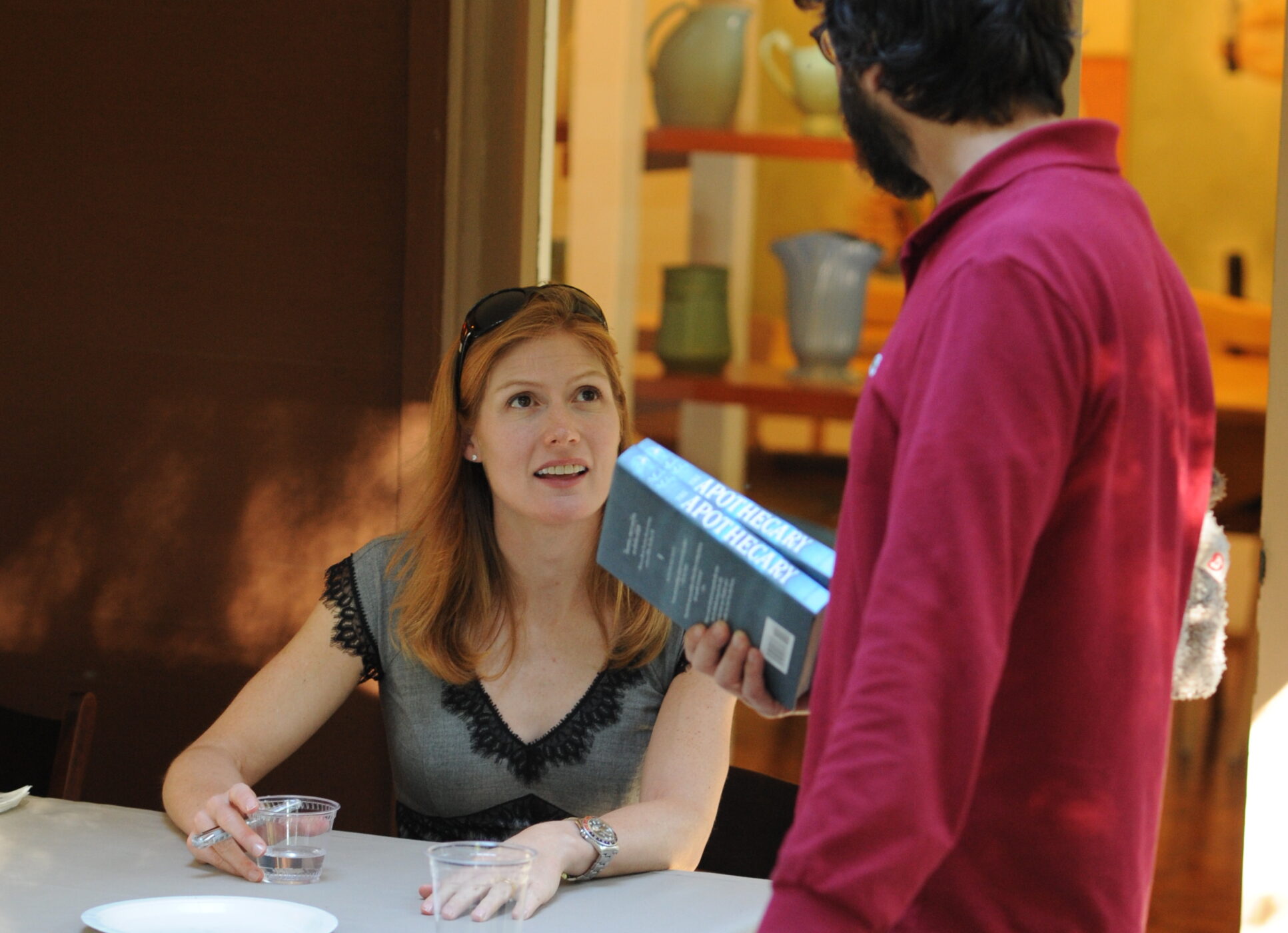 Maile Meloy grew up in Montana.  She’s written award-winning books including novels Liars and Saints, A Family Daughter, and story collections Both Ways Is the Only Way I Want It, and Half In Love.  Her essays have appeared in the New York Times, the Wall Street Journal, Slate, Sunset, O, and The New Yorker.

Maile is also a friend, and I previously interviewed her in person about the release of her first young readers book, The Apothecary.  The sequel, The Apprentices, is coming out in June.

This is a guest interview post by my daughter.  I have also read and enjoyed all of Maile’s books, but these questions are hers.

Between your first installment (The Apothecary) and the second (The Apprentices), you changed the point of view from first person to third person.  What made you change from purely Janie’s point of view to one that switches?

The Apothecary is narrated by a character named Janie Scott, and it’s the story of what happened to her when she was 14, in 1952.  I loved writing in Janie’s voice, and I think it really helped me write the novel.  But I’d never written a whole book in first person before, and I found it kind of frustrating after a while.  I could only write about things Janie experienced, so she does a lot of eavesdropping.  I could never cut away to the villains or include anyone else’s point of view.  The other main character is Benjamin Burrows, the apothecary’s son, and I briefly considered writing a second book from his point of view.  But the circumstances at the end of The Apothecary determined the form of The Apprentices: everyone is scattered.  Benjamin has gone off with his father, and Janie doesn’t know where he is.  So I started with Janie in boarding school, in close third person, meaning the narrator says “she” but is basically in her mind.  Then I could shift and have chapters where the narrator is in Benjamin’s mind (in the jungle), and Jin Lo’s mind (in China), and Pip’s, and even the apothecary’s.  It was very freeing.

Will there be a third in the series?  I hope so!

Yes!  I’m working on it now.  It begins not long after The Apprentices ends. 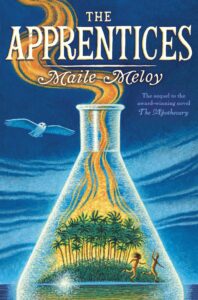 Will you do a book trailer for The Apprentices like you did with The Apothecary?

You were a successful author for adults long before writing for young readers.  What made you decide to write for young adults?

My friends the filmmakers Mark Levin and Jennifer Flackett wanted to make a movie about a mysterious apothecary, set during the cold war, but they thought it should be a novel first and asked me if I wanted to write it.  I thought it would be a short experiment—I didn’t know it was going to take over my life.  I wouldn’t have written for young adults otherwise, and I’m very indebted to them.

With chemical potions, inventions, invisibility, and some telepathic elements, you have so many scientific-magical blends.  Where do you come up with your ideas?

Mark and Jen, the filmmakers, wanted the kids to turn into birds and become invisible, so those were givens from the start, and I had to figure out why and how they would do it.  Since then, I’ve made a long list of every cool magical transformation or ability that I can think of, and then I see how I might work each one into a story, so that it’s something the characters really need to use.  When I went on tour with The Apothecary, I asked kids what kinds of magical elixirs they would want, and they had great ideas.  I’ve tried to include the ones that came up a lot.

How do you develop characters?  Do you develop them as you go or do you really sit down and think about or outline them first?

I develop everything as I go and figure out the characters as I write the story.  Who they are is inseparable from what they do and how they respond to what happens.  Sometimes things occur to me when I’m taking a walk or doing something else, but mostly I work it out on the page.

The illustrations by Ian Schoenherr are amazing.  How did you find him and how did he capture the plot so perfectly?

When we first began, the wonderful art director Cecilia Yung asked me what kind of illustrations I wanted.  Janie tells the story as something that really happened to her when she was 14, so I wanted the illustrations to be realistic, not stylized or cartoon-like.  But I also wanted them to be atmospheric and to work with the magical elements of the book.  Cecilia suggested Ian Schoenherr.  As soon as I saw an illustration he did based on a 19th-century family photograph, in which he made everyone into pigs, I knew he was the one.  And he’s done such an amazing job with the books.  He’s always very careful about detail and writes to me asking, “Is it this kind of boat?  Is it this kind of RAF knife?”  In The Apothecary, I had a character with a wooden peg leg, but Ian painted a perfect, historically accurate, articulated artificial leg, with nails holding up the socks, so I went back and changed the book.  His leg was better than mine.

Encourage your mind to come up with unexpected things, not scold it or shut it down. -Maile Meloy

Tell me your top three tips for aspiring young authors.

As a writer, you not only write but then also go on book tours and do interviews and promote your books.  Do you still write every day or do you stop when you’re out promoting titles?

I wish I could write on the road, but I can’t.  I have to stop when I’m promoting a book.  That’s why I ask for ideas for magical formulas—I want to take something back with me.  When I was at a school talking about The Apothecary, after I’d started the sequel, a girl who’d read the book asked if the character of Jin Lo (a very smart, tough, magical-chemistry expert) was in the new one.  I realized she wasn’t yet, so I went home and wrote a Jin Lo chapter.  You can see, reading The Apprentices, the point at which I visited that school.  It’s like an archaeological dig.  But it turned out to be a perfect place to have Jin Lo’s story come in, and she became a major part of the book. 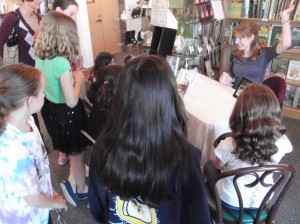 What books or other authors have inspired you personally?  Growing up, who were your favorite authors?

I loved Ellen Raskin’s The Westing Game, and Madeleine L’Engle’s books, especially the A Wrinkle in Time novels.  And the D’Aulaires’ Book of Greek Myths, which is all about magical transformation.  And the Narnia books.  I think Philip Pullman is really wonderful, not just His Dark Materials, but also the Sally Lockhart mystery novels, set in the 19th century, beginning with The Ruby in the Smoke.

You’re so creative in your writing and plot.  What advice would you give to others who want to improve their creativity?

I think editing and revising are really important, and I do it until the last possible second when they take the book away from me and send it to the printers.  But, having said that, I also think it’s important (for your creativity) not to edit or limit or criticize yourself when you’re starting something.  Be curious, be inventive, don’t beat up on ideas that don’t seem great, because they can lead you to the great ones.  You want to encourage your mind to come up with unexpected things, not scold it or shut it down.  It’s like the gardener says in The Apothecary, when he tells the kids they can become birds: you have to allow for the possibilities, and not decide in advance that certain things won’t work.  Stay open.