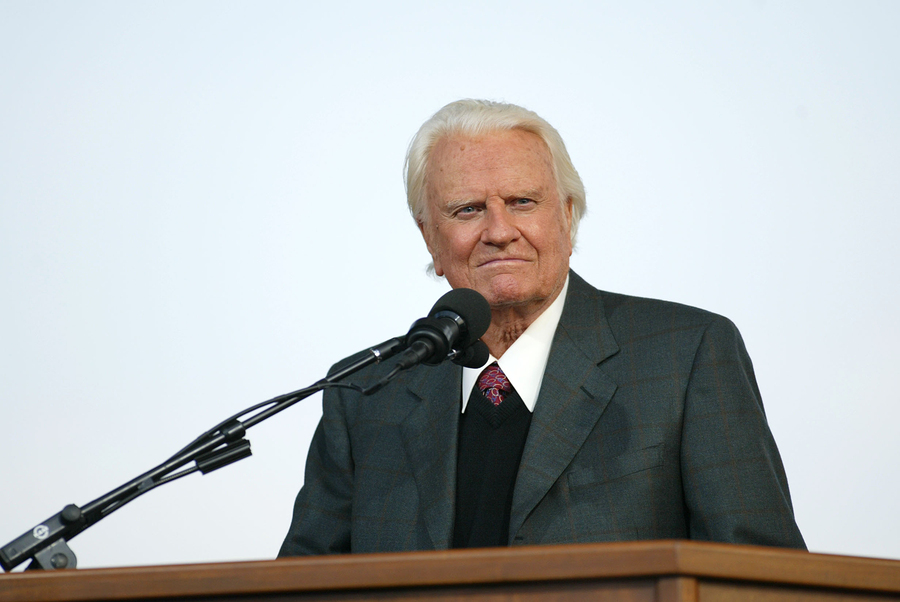 Billy Graham once said, “I look forward to death with great anticipation” and “My home is in heaven. I’m just traveling through this world.”  Today we say goodbye to the great evangelist who is now home.

Some amazing facts about Billy Graham:

Despite all of the accolades, he was puzzled by his own success, often saying “that the first thing I am going to do when I get to Heaven is to ask, “Why me, Lord?”

In his own words:

“A real Christian is the one who can give his pet parrot to the town gossip.” -Billy Graham

“God has given us two hands–one to receive with and the other to give with.” -Billy Graham

“Courage is contagious. When a brave man takes a stand, the spines of others are stiffened.” -Billy Graham

“I’ve read the last page of the Bible. It’s all going to turn out all right.” -Billy Graham

“Hope is both biologically and psychologically vital.” -Billy Graham

“Nothing can bring a real sense of security into the home except true love.” -Billy Graham

“Life is just a schoolroom with a glorious opportunity to prepare us for eternity.” -Billy Graham

“The most eloquent prayer is the prayer through hands that heal and bless.” -Billy Graham

“Comfort and prosperity have never enriched the world as much as adversity has.” -Billy Graham

“Bigotry of any kind is a sin in God’s eyes.” -Billy Graham

“Prayer is not just asking. It is listening for God’s orders.” -Billy Graham

“A child who is allowed to be disrespectful to his parents will not have true respect for anyone.” -Billy Graham

“God is more interested in your future and your relationships than you are.” -Billy Graham

“A keen sense of humor helps us to overlook the unbecoming, understand the unconventional, tolerate the unpleasant, overcome the unexpected, and outlast the unbearable.” -Billy Graham

“Prayer is simply a two-way conversation between you and God.” -Billy Graham

“Faith, more than fighting, can change the course of events today.” -Billy Graham

“It is not the body’s posture, but the heart’s attitude that counts when we pray.” -Billy Graham

“The only time my prayers are never answered is on the golf course.” -Billy Graham

“God never takes away something from your life without replacing it with something better.” -Billy Graham

“Only those who want everything done for them are bored.” -Billy Graham

“I don’t need a successor-only willing hands to accept the torch for a new generation.” -Billy Graham

“Man has two great spiritual needs. One is for forgiveness. The other is for goodness.” -Billy Graham

“We are not cisterns made for hoarding; we are channels made for sharing.” -Billy Graham

“The framers of our Constitution meant we were to have freedom of religion, not freedom from religion.” -Billy Graham

Our society strives to avoid any possibility of offending anyone – except God. -Billy Graham

If a person gets his attitude toward money straight, it will help straighten out almost every other area in his life. -Billy Graham

There is nothing wrong with men possessing riches. The wrong comes when riches possess men. -Billy Graham

The happiness which brings enduring worth to life is not the superficial happiness that is dependent on circumstances. It is the happiness and contentment that fills the soul even in the midst of the most distressing circumstances and the most bitter environment. It is the kind of happiness that grins when things go wrong and smiles through the tears. The happiness for which our souls ache is one undisturbed by success or failure, one which will deeply root inside us and give us inward relaxation, peace, and contentment, no matter what the surface problems may be. That kind of happiness stands in need of no outward stimulus. -Billy Graham

I look forward to death with great anticipation, to meeting God face to face. -Billy Graham

My home is in Heaven. I’m just traveling through this world. -Billy Graham

No, I don’t know the future, but I do know this: the best is yet to be! Heaven awaits us, and that will be far, far more glorious than anything we can ever imagine. -Billy Graham