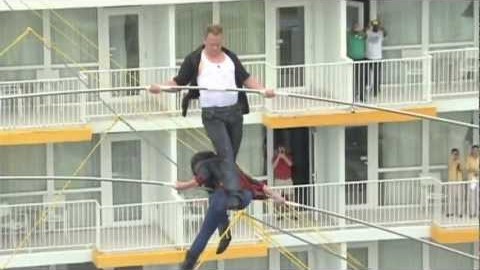 On Friday, June 15, 2012, Nik Wallenda became the first person to cross Niagara Falls on a tightrope.  In just over twenty-five minutes, he crossed 1,800 feet calmly despite gusting wind, spraying water and the pressure of the whole world watching.  As we watched from the comfort of our living room, my family and I barely breathed.

Making it all the more dramatic and nerve-wracking was the Wallenda family history.  Nik is the seventh generation of a family known for such stunts.  Several of his family members have died during daredevil attempts.  Nik’s hero is his great-grandfather, Karl Wallenda, who famously fell to his death while crossing the wire in 1978.

What was striking was that Nik was completely calm as he stepped out onto the wire.  ABC was broadcasting the event and had even rigged Nik with a microphone, allowing him to talk to a worldwide audience as he crossed.

Nik’s dream is definitely not my dream.  In fact, I can safely say that his dream is my nightmare.  Still, I admire his tenacity and his achievement.  A few of the keys to his success were evident:

The power of a dream.  Nik started walking the tightrope when we was only two years old.  He was about six years old when his family visited Niagara Falls and he voiced his dream to one day walk across it.  It wasn’t just a casual statement, it was the beginning of a dream.  Twenty-seven years later, at age 33, he made that dream come true.

The discipline of practice.  Nik practiced under various conditions to prepare for the Falls.  And, he already was a Guinness world record holder for the longest distance and greatest height ever traveled by bicycle on a wire.

The intensity of a singular focus.  Nik’s whole life has been singularly focused on tightrope walking.  When he sets a goal, his determination is legendary.

The energy of a consuming passion.  Nik’s great-grandfather, Karl, famously said “Life is on the wire, and everything else is just waiting.”

“Life is on the wire, and everything else is just waiting.”  Karl Wallenda

The convincing acts of persistence.  Nik had to convince officials in two countries to change the law in order to allow his daredevil feat.  In June of 2011, the US granted its ok, but Canada refused only a few days later.  He didn’t stop his efforts, and finally in February 2012, he received the final okay from the Niagara Parks Commission.

The power of the present.  When Nik was crossing the wire, he didn’t think about what was behind him or ahead of him.  He was thinking only about his current step.

The guiding security of faith.  Nik’s Christian faith was evident throughout the evening.  He prayed with his family before he started, and you could hear his steady prayers on the microphone the entire way across.

Nik Wallenda has already obtained the necessary permits to become the first person to cross the Grand Canyon on a tightrope.  Even as he prepared to make history by crossing the Falls, he was already thinking about his next feat. He was that certain of his success.

Today, as you visit your own goals and dreams, make sure to harness: