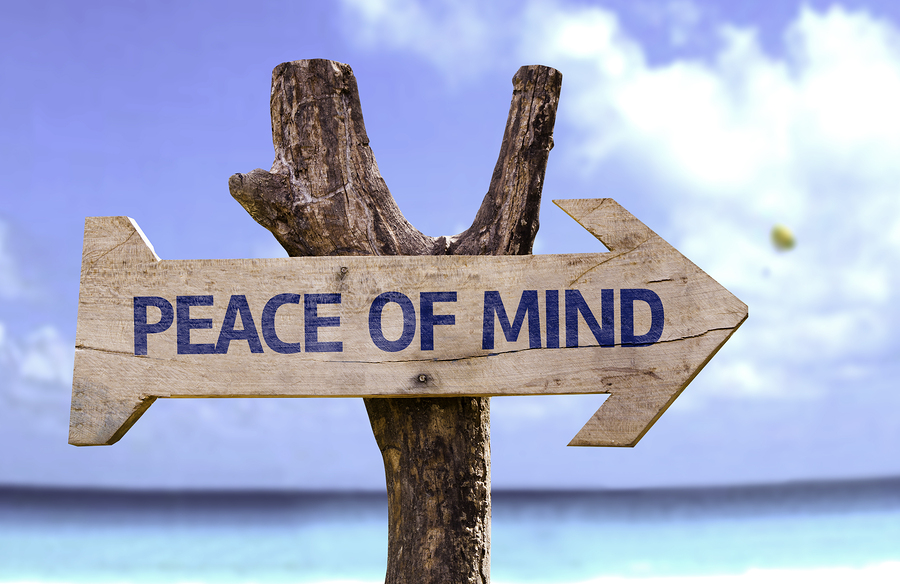 How Mentally Strong Are You?

Amy Morin first appeared on my radar when her blog post 13 Things Mentally Strong People Don’t Do was published. The post went viral and was viewed over 10 million times. Behind the powerful advice was an equally powerful story, one mixed with tragedy but also with hope and resolve.

Using her expertise as a clinical social worker and therapist, Amy works to help people facing setbacks reach for happiness and success.  Whether you are depressed or doing well, studying these 13 ideas will make you mentally stronger.

After reading her new book, 13 Things Mentally Strong People Don’t Do: Take Back Your Power, Embrace Change, Face Your Fears, and Train Your Brain for Happiness and Success I was so busy talking about it and giving copies to friends that I forgot to circle back and interview her.  I’m now pleased to share our conversation in the hopes it may help others going through tough times.

“When you become mentally strong, you will be your best self.” -Amy Morin

How do you define mental strength?

Mental strength has three parts: thoughts, feelings, and behaviors. Building mental strength involves learning to regulate thoughts so they’re helpful and realistic, understanding how to control emotions so your emotions don’t control you, and discovering how to behave productively despite your circumstances.

“Don’t allow inaccurate beliefs about your abilities to hold you back from success.” -Amy Morin

From Grief to Mental Strength

What inspired you to first write about mental strength? 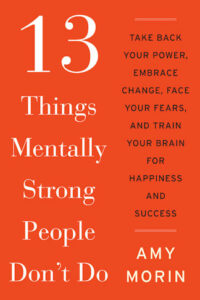 I’ve always been interested in psychology and resilience. Over the years as a therapist, I’ve really enjoyed helping other people learn how to increase their mental strength. But in 2003, my interest became personal.

I had been working as a therapist for about a year, and things were going well for me both professionally and personally. But my life changed in an instant when my mother passed away suddenly and unexpectedly from a brain aneurysm. She and I had been very close, and I certainly learned a lot about mental strength first-hand as I managed my grief.

Then, on the three year anniversary of my mother’s death, my 26-year-old husband died from a heart attack. Dealing with such a sudden and major loss in my life was incredibly painful. I was able to take a little time off work, but I eventually had to return to my job as a therapist. Helping other people address their problems in my therapy office while privately dealing with my own grief taught me a lot about mental strength.

A few years later, just as life was looking pretty good again, I experienced another major loss. I had just gotten remarried when my father-in-law, whom I had grown incredibly close to, was diagnosed with terminal cancer.  Unlike my previous two losses which were both sudden and unexpected, this time I knew what was coming.

As my father-in-law’s health deteriorated I wrote my original list, “13 Things Mentally Strong People Don’t Do.” It was meant to serve as a reminder of all the things I needed to avoid if I wanted to face the future with courage and strength. About two weeks after I wrote the article – in the midst of it going viral – he passed away.

“The only real mistake is the one from which we learn nothing.” -John Powell

Train Your Brain for Happiness

You’ve been through so much grief. Your pain is now benefiting many who are learning lessons from your experience. Part of the subtitle of your book is Train Your Brain for Happiness and Success. How do you train your brain?

Training your brain for happiness and success is not the same as chasing happiness.  When people chase happiness, they give in to instant gratification, and it leaves them feeling unhappier than ever. Building mental strength is about working toward your goals and living according to your values, both of which lead to happiness over the long haul. Training your brain for happiness involves paying close attention to all the choices you make each day and examining how those choices impact your mental strength.

I love the story of Marla Runyan. As a child, she developed a condition that caused her to gradually lose her eyesight. As she grew up, she discovered her love for running.  She never allowed herself to feel self-pity and despite her deteriorating vision, she became a competitive athlete. She eventually became the first legally blind athlete to compete in the Olympics. I find her story incredibly inspiring because she shows how much we can accomplish if we choose to be grateful for what we have in life and choose to persevere despite whatever challenges life throws our way.

Of the 13 things mentally strong people don’t do, are there one or two that more people struggle with?

It’s really interesting to hear which of the 13 things people struggle with the most, and it seems as though most of us have one or two that are the hardest. And often, the ones we struggle with the most changes over time. For example, it’s easy to avoid resenting other people’s success when you’re doing well in life. But, if you lose your job or experience hardship, it’s a little harder to celebrate alongside as friends and family continue to experience success.

If I had to pick the two I most commonly hear people say they struggle with, it’d be shying away from change and worrying about things they can’t control.

“Give yourself permission to move forward.” -Amy Morin

Make Peace with the Past

Making peace with the past seems to be one that prevents many people from achieving all they could.  What techniques do you use to help people accomplish this?

While reflecting on the past – and learning from it – is helpful, dwelling on it isn’t. The first step in letting go usually involves identifying all the ways staying stuck in the past interferes with the present. Then, we identify the reasons why someone struggles to make peace with the past. People often dwell on the past because of unresolved grief, guilt, or shame. Their intense emotions make it difficult to perform at their best.

Sometimes, people can’t move forward until they forgive themselves or someone else. Choosing to let go and move forward requires a conscious effort to do so. Changing the way someone thinks about the past is essential to moving forward. But there are plenty of exercises that can help people learn to stop ruminating and begin to think about the past in a more productive manner.

“Changing the way someone thinks about the past is essential to moving forward.” -Amy Morin

The last one is not to expect immediate results.  In this day of immediate gratification and instant answers, I would think it is a challenge.  How do you encourage resilience and perseverance?

The digital world certainly makes this one a little more complicated. I encourage people to establish realistic goals and smaller objectives. Often, it’s about focusing on what you want to accomplish today. Saying, “I want to lose 100 pounds” is just too overwhelming, so it’s important to start by focusing on the first 5 pounds initially. 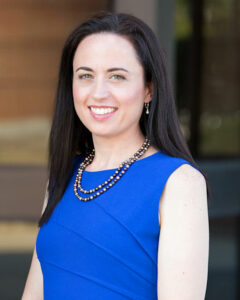 It’s also important to have a plan for how you’ll measure progress. Progress toward our goals doesn’t always come in a straight line, and it can cause us to give up prematurely when we make assumptions that our efforts aren’t working.

For example, I frequently work with parents on addressing children’s behavior problems, like temper tantrums. When a child’s temper tantrums appear to be a bid for attention, I encourage parents to ignore the behavior. But, sometimes parents will come back the following week and say, “That didn’t work at all! My child started screaming louder.” I have to explain to them that when a child screams louder it’s because he’s working harder to get attention because the new parenting strategy is effective.

Similarly, when we make changes in our own lives, things often get a little worse before they get better. But that doesn’t necessarily mean we aren’t making progress. So it’s important to have a game plan in place that says how you’ll recognize progress and how you’ll stay on track for the long haul.

13 Things Mentally Strong People Don’t Do: Take Back Your Power, Embrace Change, Face Your Fears, and Train Your Brain for Happiness and Success

Leading with Intention: Every Moment is a Choice